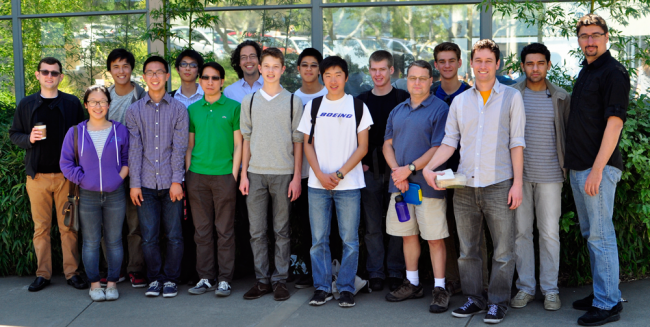 For the sixth consecutive year, researchers across Berkeley Lab hosted 12 juniors from Albany High School in conjunction with the school’s annual Job Shadow Day. In advance of the event, students select areas of career interest and parent volunteers match them with mentors around the Bay Area.

Ten of the students spent the morning of Thursday, April 10 at the lab, ending their visit with lunch with their mentors. Two other students gave up a day of their spring break to visit mentors on April 15 and 17. Jon Bashor, Computing Sciences communications manager, organized the mentor-student matchups. 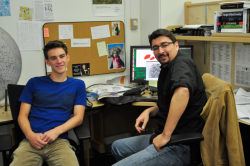 Andrew Sterner, a student who wrote “Astronomy is interesting to me in relation to theoretical physics” in his application spent the morning with Zarija Lukic of the Computational Cosmology Center in the Computational Research Division (CRD). “He was blowing my mind every five minutes with his descriptions,” Sterner said. 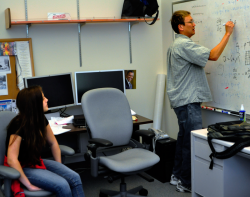 Swechchha Parajuli, who plans to study physics and computer science, met with Rollin Thomas in the Computational Cosmology Center on April 17. She had to push back her participation to join in a Southern California tour by the Albany High choir. “It was great talking about the computation he actually does here at the lab, as well as the science behind it,” Parajuli said. At the end of her visit, she had lunch with Thomas and other staff members, who gave her suggestions about applying for universities. 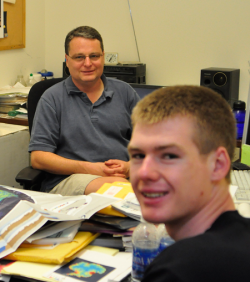 In a follow-up note to Dan Martin of CRD’s Applied Numerical Algorithms Group, student David Harrison wrote, “Thank you very much for taking the time last Thursday to mentor me during Job Shadow Day. I feel that it has given me a better idea of what research work involves and of the real applications for computers in science. I particularly enjoyed seeing the application of calculus to real world problems.” Harrison, one of two students to ride his bicycle up the hill for the day, also spent time talking about his passion for biking with Martin, an avid bicyclist himself.

“I'm glad you enjoyed it and found it useful too, and hope that your ride back was, well, more fun than the ride in,” Martin wrote back to Harrison. Martin, who most recently has been developing tools to simulate the melting of Antarctic glaciers, said he was impressed by how quickly Harrison was able to grasp what the group is doing and guess implications before Martin had a chance to explain them.

Additionally, Lisa Illes met later in April with Dipankar Dwivedi of the Earth Sciences Division. And on May 21, Lambert hosted a third student, Atharva Karnik, who is interested in mechanical engineering.

To get in the spirit of the day, Sterner joined Harrison in riding their bicycles from home all the way up the hill to the lab.