LED Lighting Comes out of the Dark 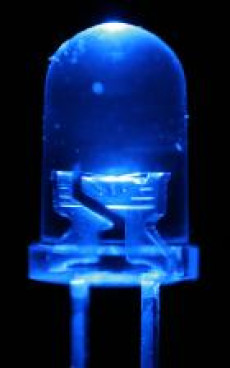 Despite being cool, ultra-efficient and long lasting, the light-emitting diode (LED) has yet to conquer the general lighting market due to a problem called “efficiency droop.” New findings from simulations carried out at the National Energy Research Scientific Computer Center (NERSC) have unearthed droop’s elusive cause, researchers say, paving the way for wider LED use.

At low power, the nitride-based LEDs used to generate white light are astoundingly efficient; but pump up the current to room-illuminating levels and efficiency takes a nosedive. “If you use more electricity, you do get more light, but the efficiency isn’t as good, and that adds to the higher cost of LED-based lighting,” says Emmanouil Kioupakis, a researcher at the University of California Santa Barbara (UCSB) and lead author of the study.

Published online April 19 in Applied Physics Letters¹,  the research relies on detailed, quantum-mechanical simulations of the inner-workings of nitride-based LEDs to finger the culprit.

The new study doesn’t solve the problem of droop, but it does set researchers and engineers on the right path to do so, says Chris Van de Walle, head of the UCSB research group that carried out the work: “Identifying the root cause of the problem is an indispensable first step toward devising solutions.”

Today, lighting accounts for around 20 percent of the average U.S. household’s electrical consumption. That’s not very surprising when you consider that over 80 percent of the light bulbs sold today are incandescent, a technology that has changed little since its 1880 commercial debut.

Incandescent lights work by heating a wire until it glows, converting far more power into heat than light (see “Lighting Lineup,” for more). As a result, the garden-variety light bulb only produces about 16 lumens per watt (lm/W). A lumen is roughly equal to the amount of light the human eye perceives from one candle about one foot away as it falls on a square foot of area.

Theoretically, LED-based lights can produce up to 300 lm/W. That’s about three-times better than today’s most energy-efficient alternative, compact fluorescent lights (CFLs). Because of droop, however, today’s high-power LED lights perform about the same or slightly better than CFLs.

A Department of Energy study projects that improved efficiency and increased use of LED lights over the two decades between 2010 and 2030 could save 1,488 terawatt-hours of electricity. That's a savings of $120 billion. It would also spare the atmosphere an estimated 246 million metric tons of greenhouse gas emissions over the same period.

Adding to the urgency to defeat LED droop is the fact that a growing number of nations have banned the sale of wasteful incandescent lights in coming years. Although LEDs last longer, operate cooler, and don’t pose the disposal hazards of compact flourescent lights, which contain the heavy-metal mercury, they also cost up to 10 times as much as CFLs. To offer a viable alternative, high-power LED lighting has to save enough energy to convince consumers it is worth a bigger up front investment.

Mystery of the Missing Photons

At the heart of every LED is a multi-layered microchip. In the case of blue and green LEDs, the base semiconductor material is gallium nitride, so the entire family is called nitride-based LEDs.

One outer layer of this semiconductor sandwich is doped with an element that has just one more electron on its outer shell than the atom it is replacing in the semiconductor’s crystal lattice (gallium). Because of the overabundance of negatively charged electrons, this is called an n-type semiconductor.

The other slice of bread in this metaphorical sandwich is a p-type (positive-type) semiconductor. It is doped with an element that has one less electron on its outer shell than the gallium atom it replaces in the lattice. The missing electrons create what physicists call an electron hole, usually just termed a hole, with a positive charge.

In nitride-based LEDs, light is emitted when electrons (negative) recombine with electron holes (positive) in the quantum well created between two layers of semiconducting materials. The mechanism loses efficiency at high-power, limiting the use of LEDs in general lighting.

When current is applied across the chip, the “extra” electrons and holes are pushed into a sandwich of very thin layers between these two outer wafers. Here they are trapped in a space so small that the weird rules of quantum physics reign: a quantum well.

When an electron and hole combine in this well, out pops a photon of light. Apply more electricity and you get more photons. At least, that’s what happens in red, yellow and orange LEDs.

The exact cause of drooping photon production in nitride-based LEDs has been hotly debated between two main camps: One thinks the electrons become so energized that they overflow the quantum well and escape. The other camp, to which Van de Walle’s group belongs, thinks that the energy created by an electron/hole combination — physicists call it “recombination” — is being quietly swallowed by another charge carrier (a hole or an electron) inside the quantum well. This phenomenon is called Auger recombination.

In this study, Kioupakis and colleagues simulated the semiconductor alloys involved in LEDs, a computationally intense process. Using up to 4,000 processor cores at once and a total of a million processor core hours, the team calculated from first principles the interactions of charge carriers involved under different conditions for different loss mechanisms.

“Because of the vast number of possible beginning and ending states, these calculations are very challenging,” says Kioupakis. “That’s why we used NERSC; its highly parallel Franklin and Hopper systems offer the kind of power we needed. We couldn’t have done it otherwise,” he explains.

This illustration shows what happens in nitride-based LEDs. At left, an electron (negative) and electron hole (positive) recombine and release light (left). In Auger recombination (right) the electron and hole combine with a third carrier, releasing no photon in the process. In this case, the energy loss is also assisted by indirect processes, vibrations in the crystal lattice shown as squiggles.

Illuminating the Path Ahead

The team’s research suggests ways engineers might work around the problem, but there’s no way to solve it directly since the conditions producing Auger recombination are intrinsic to nitride-based LEDs. “As long as you have a lot of carriers interacting with each other, you are going to have Auger recombination,” Kioupakis says.

Some of the methods suggested by the research—lowering carrier density by widening the quantum well or growing the devices along different crystallographic directions, for example—are already being explored by researchers and industry.

“With Auger recombination now established as the culprit, we can focus on creative approaches to suppress or circumvent this loss mechanism,” Van de Walle says.