NERSC Honored for Innovative Use of Globus Online 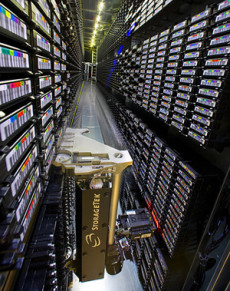 At GlobusWORLD 2011, held April 11-13 at Argonne National Laboratory, NERSC was awarded "Most Innovative Use of Globus Online" for using it to archive data onto HPSS. What makes the NERSC application unique is that Globus Online was originally developed as a reliable and secure tool for moving data between remote sites, but NERSC staff also found that it could be used to easily move data between computing systems and the center's HPSS data archive.

Archiving data has traditionally involved running command-line tools, but several NERSC users have requested a graphical user interface (GUI) to move data between HPSS and compute systems. A GUI makes it easier to back up or restore relevant data. Using Globus Online, NERSC demonstrated a "Drag and Drop Archiving" capability which is currently being tested and will be available to the NERSC user community shortly.

"Users have been asking for an easy way to access and archive their data and Globus Online's drag-and-drop interface gives them this option," said Shreyas Cholia, who presented the case study in his talk on "Globus Online @ NERSC" as part of a conference session on "Globus Community Updates and User Experiences."

Also contributing to the implementation and testing are Nick Balthaser, and Matt Andrews of NERSC, and Michael Link and Karl Pickett of Argonne National Lab. The system is still being fine-tuned and is expected to go into full production soon.