From climate to energy sciences, Franklin has tackled some of the most challenging scientific problems facing humanity. In November 2008, it was the world’s seventh most powerful supercomputer according to the TOP500 list. By 2009, Franklin underwent a significant upgrade that doubled its number of processor cores (to 38,288) and increased its theoretical peak performance to 352 teraflops/s—three and a half times that of the original system. Over its five-year lifetime, Franklin has delivered 1.18 billion processor hours to scientific research. According to the most recent TOP500 list, Franklin is the 38th most powerful supercomputer in the world.

In addition to its scientific accomplishments, Franklin was also a trailblazer in supercomputing software. Franklin was the first Cray system to fully utilize the Cray Linux Environment (CLE) operating system. Today, all Cray systems run CLE.

“Franklin has proven to be a tremendous benefit to the DOE computational science community,” says Kathy Yelick, Associate Laboratory Director for Computing Sciences at the Lawrence Berkeley National Laboratory (Berkeley Lab). “From the day it went online, Franklin has been a scientific workhorse for many important computational science projects. Now that the system is ready to retire, we are all grateful for its contributions.”

Here are some science highlights from five years in production: 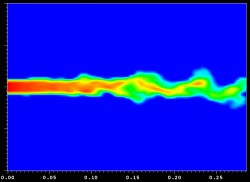 This is an image of predicted coal particle concentration in a coal gasifier from the Arches code. Image: Charles Reid, LLNL

Approximately half of all electricity used in the United States comes from coal. When burned, this fossil fuel emits pollutants that contribute to smog, acid rain and increased greenhouse gases in the atmosphere. But as the demand for power increases, and affordable renewable energy sources remain years away from offsetting this need, one fact is clear: Coal is here to stay, at least for the foreseeable future.

“The scale of computing provided by NERSC was absolutely key in providing me with the resources I needed to tackle a complex, multi-scale, multi-physics problem like coal gasification,” says Charles Martin Reid, who developed the tool as a University of Utah graduate student, but is currently a postdoctoral researcher at the Lawrence Livermore National Laboratory. “Having game-changing resources like Franklin and Hopper allowed me, and allows all scientists, to extend the capabilities of scientific induction and explore much more deeply the implications of a model.”

Unlocking the Secret of a Rechargeable Heat Battery 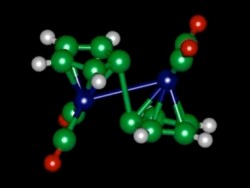 A molecule of fulvalene diruthenium, seen in diagram, changes its configuration when it absorbs heat, and later releases heat when it snaps back to its original shape. Image: Jeffrey Grossman

Broadly speaking, there have been two approaches to capturing the sun's energy: photovoltaics, which turn the sunlight into electricity, or solar-thermal systems, which concentrate the sun's heat and use it to boil water to turn a turbine, or use the heat directly for hot water or home heating. But there is another approach whose potential was seen decades ago, but which was sidelined because nobody found a way to harness it in a practical and economical way. This is the thermochemical approach, in which solar energy is captured in the configuration of certain molecules that can then release the energy on demand to produce usable heat.

In 1996, Peter Vollhardt and his colleagues at UC Berkeley and Berkeley Lab discovered a promising heat-storing chemical compound called fulvalene diruthenium (tetracarbonyl). But this compound was impractical for widespread energy storage because it included ruthenium, a rare and expensive element. Moreover, no one understood how fulvalene diruthenium worked, which hindered efforts to find a cheaper variant. In 2010, Vollhardt began constructing a working device as proof of principle. To understand how this molecule accomplishes its energy storage and release, Vollhardt teamed up with Jeffrey Grossman of the Massachusetts Institute of Technology, who did quantum mechanical calculations on NERSC’s Franklin system to answer this question.

The calculations showed that the fulvalene diruthenium molecule undergoes a structural transformation when it absorbs sunlight, putting the molecule into a higher-energy state where it can remain stable indefinitely. Then, triggered by a small addition of heat or a catalyst, it snaps back to its original shape, releasing heat in the process. But the process is a bit more complicated than that.

“It turns out there’s an intermediate step that plays a major role,” said Grossman. In this intermediate step, the molecule forms a semistable configuration partway between the two previously known states. “That was unexpected,” he said. The two-step process helps explain why the molecule is so stable, why the process is easily reversible, and also why substituting other elements for ruthenium has not worked so far.

In effect, explained Grossman, this discovery makes it possible to produce a “rechargeable heat battery“ that can repeatedly store and release heat gathered from sunlight or other sources.

An On-Off Switch for NanoElectronics

In 2009, researchers at the Berkeley Lab’s Molecular Foundry and Columbia University found that electrical resistance through a molecular junction—a nanometer scale circuit element consisting of a single molecule contacted with gold wires—can be turned on and off by simply pushing and pulling the junction. Experts believe that this molecular-scale control could be leveraged for future nanoscale electronic devices.

The switching phenomenon was initially discovered in experiments conducted by a team of researchers led by Latha Venkataraman of Columbia University. But the underlying physics would only later be understood when a group of theorists led by Jeff Neaton of the Berkeley Lab’s Molecular Foundry teamed up with the Columbia researchers to develop a theory to describe the conductance of individual molecules trapped between gold electrodes. This work was done with the help of the NERSC’s Franklin system.

“The high throughput and magnitude of the NERSC resources facilitated a highly interactive back-and-forth with experimentalists, allowing us to rapidly modify our calculations and compare with experimental results as they became available,” said Neaton.

Upon its retirement, Franklin handed off its workload to NERSC’s first petascale supercomputer—a Cray XE6 system named Hopper, in honor of American computer scientist Grace Murray Hopper. The system, which went into production last year, is currently the eighth most powerful in the world according to the most recent TOP500 list.