This year, Computing Sciences hosted six students, while other Lab organizations hosted another six. Two more students will visit the Lab on May 2.

"Job Shadow Day was such an insightful event for me; I was able to get a sense of what ESnet does, my mentor Gopal Vaswani was awesome, and I even got to take away new knowledge from the whole experience," said Terence Sun, who was interested in networking and web development and was hosted by Vaswani and John Christman. "The routing room is full of high-end machines with crazy wiring, handling input and output at 100 Gbps. Needless to say, I found Job Shadow Day as a great experience and it really broadened my scope for different jobs. I wish we had more opportunities similar to this."

Treva Obbard, who is interested in a writing career, met with Computing Sciences science writer Linda Vu and Paul Preuss, a writer in Public Affairs who has also authored 13 novels. Preuss gave Obbard a copy of one of his science fiction books, an area of particular interest to the her.

"Everyone I talked to was really nice, and they made their jobs sound fun and interesting," Obbard said. "I never really thought about science writing as a job before."

Other students and mentors at the Lab were: 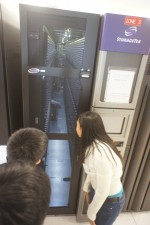 On Wednesday, May 2, students Felix Yoon and Amy Xie will visit with mentor Ken Chow to learn more about engineering at the Advanced Light Source.