Scientific Computing for Energy Independence and a Clean Energy Future Oregon’s odd-even plan reduced the lines at gas stations during the fuel crisis in the fall and winter of 1973-74. This station was servicing cars with even-numbered last digits on their license plates on an even-numbered calendar day. Image credit: David Falcone, National Archives and Record Administration.

When the Arab members of OPEC (Organization of Petroleum Exporting Countries) announced an oil embargo in October 1973, a global crisis ensued and a supercomputing revolution ignited.

Over the next few months, world oil prices quadrupled. In the United States, gas prices skyrocketed. Lines at the gas pumps stretched for miles. And the quest for alternative energy sources led to the Department of Energy’s (DOE’s) first unclassified supercomputer center—the Controlled Thermonuclear Research Computer Center (CTRCC), established in 1974 at the Lawrence Livermore National Laboratory.

Today, the center is called National Energy Research Scientific Computing Center (NERSC). It is now located at the Lawrence Berkeley National Laboratory (Berkeley Lab) and its mission has expanded to support a variety of scientific research from climate science to high-energy physics. Still, the center remains committed to research into alternative energy sources crucial to America’s energy independence and for a clean and sustainable energy future.

In honor of DOE’s supercomputing month, here are just a few of the energy research projects computing at NERSC. 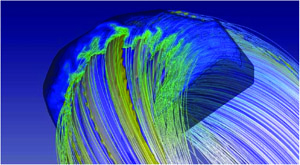 In this image, the torus of plasma is tilted upward to show the bottom. The magnetic fields within the plasma are represented as white lines and approximately follow a contour of constant plasma temperature as it circles around the torus. The temperature is shown as blue/yellow surface. Imge credit: Linda Sugiyama, MIT

If humans could harness nuclear fusion, the process that powers stars like our Sun, the world could have an inexhaustible energy source. In theory, scientists could produce a steady stream of fusion energy on Earth by heating up two types of hydrogen atoms—deuterium and tritium—to more than 100 million degrees centigrade until they become a gaseous stew of electrically charged particles, called plasma. Powerful magnets compress these particles until they fuse together, releasing energy in the process.

If researchers can unlock the sugars stored in plant cellulose, then crops like this switchgrass could be turned into biofuels, rather than using corn or other food crops. Image credit: Roy Kaltschmidt, Berkeley Lab.

Humans have been converting “biomass”—organic material, derived from plants and animals—into energy since the beginning of civilization. Every time you add firewood to a dying fire, you are converting biomass (wood) into energy (heat) through a process called direct combustion. For thousands of years, we have used this energy to cook food, stay warm and even power steam engines.

But despite its use throughout history, direct combustion is actually not a very efficient or sustainable way to generate energy. It takes a lot of biomass to generate just a little bit of energy and a lot of pollutants are produced in the process. So biologists, chemists and physicists are seeking to understand the energy producing processes that took nature billions of years to perfect. By harnessing these processes, they hope to engineer biofuels that are cheap to mass-produce, sustainable and generate energy more efficiently.

One area of particular interest is cellulose. These tough fibers found in plant cell walls aren’t digestible by humans, so they’re plentiful and cheap, unlike another popular biofuel crop, corn, which is the source of ethanol. If researchers can figure out an economical, scalable way to break loose the sugars locked up tight in cellulose, we’d have a plentiful, reliable, renewable and sustainable source for liquid biofuels. By running simulations on NERSC supercomputers, scientists hope to unlock the secrets of how microbes and molecules in termite guts, fungi and other living things break loose cellulose’s sugars. This information should help them engineer molecules and microbes that can do the job better, cheaper and on a larger scale. 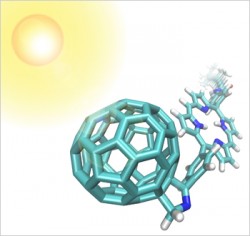 Solar power could transform the energy landscape in the United States, reducing the nation's reliance on coal and natural gas for electricity. But today, solar power remains more expensive on average than fossil fuels. Although sunlight is relatively abundant, traditional photovoltaics require rare-earth elements that are typically imported from places that are politically volatile or where it is logistically difficult to extract. This, in turn, raises the cost of producing solar panels.

To bring down the cost of solar energy, computational chemists are using supercomputers at NERSC to develop new materials for converting sunlight into energy. Some of these researchers are taking inspiration from biology. They believe that if humans could learn from plants—which use only common elements, such as hydrogen, nitrogen, carbon and  oxygen to convert sunlight into energy—the cost of solar power could be significantly cut. Meanwhile, others are taking inspiration from the electronic properties of molecules. Both groups are running simulations to gain a deeper understanding of the molecular and electronic properties that give rise to photovoltaic behavior.