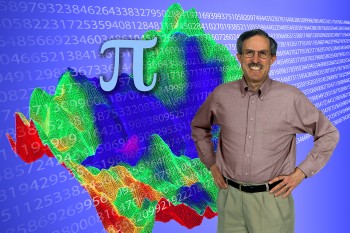 In 1993 B.G. (before Google), when writers for The Simpsons needed the 40,000th decimal digit of π (pi)for a punch line in season four’s “Marge in Chains” episode, they turned to mathematician and computer scientist David Bailey who confirmed that the digit was 1. And his reputation as the “Pi Guy” was set.

But Bailey’s professional relationship with pi began years before Hollywood writers came calling. In 1986, a pi-calculating program that Bailey wrote, using an algorithm created by brothers Jonathan and Peter Borwein, detected some hardware problems in one of the original Cray-2 supercomputers that had escaped the manufacturer’s tests.

Using Bailey’s computer program in the late 1990s, Canadian mathematician Simon Plouffe discovered a new formula for pi. Known as the Bailey–Borwein–Plouffe formula, the method allows anybody to directly calculate the binary digit of pi in a given position without the need to calculate any of the preceding digits. Prior to its discovery, no one thought that this was possible.

And in 2011, Bailey and Jonathan Borwein teamed up again to find the sixty-trillionth binary digit of pi-squared—another seemingly impossible feat. Borwein and his colleagues modified Bailey’s original pi-calculating program, which ran on a single processor, and made it run faster and in parallel on thousands of independent processors. The calculation would have taken a single computer processor unit (CPU) 1,500 years to calculate, but they managed to complete this work in just a few months on an IBM "BlueGene/P" supercomputer.

Why does this all matter? We’re asking Berkeley Lab’s Pi Guy. 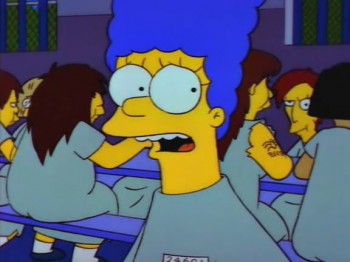 Scene from The Simpsons "Marge in Chains."
About the Episode:http://bit.ly/1do5lJPi Reference: http://wrd.cm/1gtOYbh

Q: David, the concept of pi has been around for centuries—multiply 3.14159 by the diameter of any circle to get its circumference. In fact, ancient Egyptians used pi in their pyramid designs. So why is it still so mysterious?

Bailey: Yes, pi has been analyzed and computed for literally thousands of years. It is arguably the only topic of mathematics that was studied in ancient times, yet still intrigues mathematicians today. In spite of the many theorems have been proven about pi, there are still unanswered questions, including the age-old question of whether and why the digits of pi appear “random,” that is, whether its digits are statistically random in a specific sense.

In fact, Jonathan Borwein (University of Newcastle) and I recently recapped the history of pi and describe recent research on whether pi is normal in the March issue of the American Mathematical Monthly.

Q: Aside from questions of geometry, are there any other practical applications for pi today?

Bailey: Yes there are! Pi is used in almost every field of science and technology. Your cell phone, which performs sophisticated signal processing computations, involves pi when the phone converts a signal to a frequency spectrum (using what is known as a fast Fourier transform). Similar computations are done by cosmologists studying the cosmic microwave background, and by biologists computing the properties of proteins, among many others.

Q: Are there any practical applications for the Bailey-Borwein-Plouffe formula?

Bailey:We haven’t found any yet, but we have found that this and other similar formulas have deep connections to the randomness of the digits of pi. If these connections can be further developed, they might conceivably lead to techniques to produce reliable random numbers for e-commerce, for instance.

This map shows the oldest light in our universe, as detected with the greatest precision yet by the Planck mission. The ancient light, called the cosmic microwave background, was imprinted on the sky when the universe was 370,000 years old. (Image credit: ESA and the Planck Collaboration)

Q: Around Berkeley Lab you are known as the “Pi Guy,” what led to your fascination with pi?

Bailey:I have always been fascinated by pi. I still recall when I was in graduate school, that I memorized digits of pi to pass the time during not-so-interesting lectures. Little did I know I’d be using it throughout my career.

Q: I’ve heard that you can even find your name in pi. How do you do that?

Bailey: Indeed, there are tools to do this. One that I developed is available at http://pi.nersc.gov. If you type in a name up to six characters long, almost certainly it will be found coded in the first four billion binary digits of pi.

Q: In the field of supercomputing, you are well known as the author of the NAS Parallel Benchmarks for evaluating the performance of supercomputers. Is there a pi tie-in there somewhere?

Bailey: Yes, even in the NAS Parallel Benchmarks, pi appears, notably in the 3-D FFT (Fast Fourier Transform) benchmark, which is one of the most widely cited of the set.

Q: What are some of your favorite “formulas” for pi and/or pies?

Bailey: For eating, apple and cherry pies are my favorites. As for mathematical formulas, I wrote about some of my favorites for computing the digits of pi.

Bailey received a B.S. from Brigham Young University in 1972 and a Ph.D. in mathematics from Stanford University in 1976. He spent 14 years as a computer scientist at NASA Ames Research Center, before joining Lawrence Berkeley National Laboratory 1998. At the Berkeley Lab, Bailey did research work in numerical algorithms, supercomputer performance and parallel computing. He officially retired from the Lab in June 2013, but continues as an active researcher in the field.