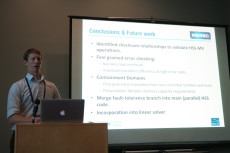 Brian Austin of NERSC and Eric Roman and Xiaoye “Sherry” Li of the Computational Research Division won the Best Paper Award for “Resilient Matrix Multiplication of Hierarchical Semi-Separable Matrices” at the Fault Tolerance for HPC at eXtreme Scale (FTXS) Workshop. FTXS is held June 15-19 in Portland, Ore., as part of the 24th International ACM Symposium on High Performance Distributed Computing.

The award included a prize of a new Playstation 4, which Austin donated to runner-up presenter Alireza Goudarzi, a Ph.D. student at the University of New Mexico.

The FTXS Workshop is aimed at identifying looming problems and discussing promising research solutions in high performance computing in general and, in particular, extreme-scale "leadership class" supercomputers. A new scaling in numbers of processing elements has superseded the historical trend of Moore's Law scaling in processor frequencies. This progression from single core to multi-core and many-core will be further complicated by the community's imminent migration from traditional homogeneous architectures to ones that are heterogeneous in nature. As a consequence, the HPC community is facing rapid increases in the number, variety and complexity of components, and must overcome increases in aggregate fault rates, fault diversity and complexity of isolating root cause.