Originally from China, Liu earned a Bachelors degree in Computer Science from Jinan University in Guangdong, China. Shortly after, he migrated to the United States to pursue a Ph.D. in parallel computing from Texas Tech University in Lubbock, Texas.

Although Liu might be new to NERSC, he is no stranger to Berkeley Lab or to the task of working with large scientific datasets. In the summer of 2013, Liu was an intern in the Computational Research Division’s Scientific Data Management Group. Here, he worked with Berkeley Lab researchers to develop a system—called the Scientific Data Services (SDS) framework—to improve the read performance of raw experimental data to a parallel file system, where it would be analyzed. As part of his doctoral research on scientific data management and parallel I/O, Liu also collaborated with the HDF group on enabling in-memory computing in scientific I/O library.

“I became interested in computing in high school, when I read a book about how to build software using visual basic programming,” says Liu. 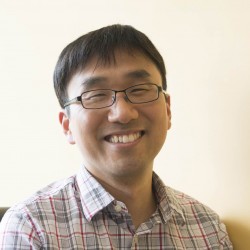 As a new postdoctoral researcher in CRD’s Center for Computational Sciences and Engineering (CCSE), Changho Kim will be developing numerical methods for fluctuating hydrodynamics combined with chemical reactions. Unlike the Navier-Stokes equations that describe fluid dynamics at the macroscopic scale, fluctuating hydrodynamics also incorporates noise, which describes fluctuations in a fluid system at mesoscopic scale.

A native of South Korea, Kim notes that his interest in computing sparked as an undergraduate at the Korea Advanced Institute of Science and Technology (KAIST) when he saw the results generated by his first molecular dynamics code.

“I have always wanted to see how math equations or physical laws would behave by my eyes. One of the most spectacular moments was that I could see the movement of the Lennard-Jones fluid particles on a computer screen, which was generated from my first molecular dynamics code,” says Kim. “Ever since then, I have been interested in molecular dynamic systems and investigated how the randomness in the dynamics originates and how it can be described effectively.”

After earning at PhD in chemistry from KAIST, Kim moved to Rhode Island to pursue another PhD in applied math from Brown University. In his spare time, Kim enjoys taking very long walks. In addition to exploring Bay Area tracking courses, Kim would like to someday walk the Camino de Santiago.