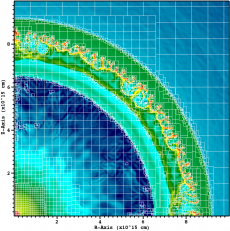 Simulation of a collision between two shells of matter ejected by massive supernova eruptions, performed with the Castro AMR hydrodynamics code. Simulation and visualization courtesy of Ken Chen.

Berkeley Lab will lead one of four co-design centers under the Department of Energy’s Exascale Computing Project (ECP). The Block-Structured Adaptive Mesh Refinement Co-Design Center will be led by John Bell of the lab’s Computational Research Division, with support from Argonne National Laboratory and the National Renewable Energy Laboratory. The center will be funded at $3 million a year for four years.

The goal is to develop a new framework, AMReX, to support the development of block-structured AMR algorithms for solving systems of partial differential equations (PDE’s) with complex boundary conditions on exascale architectures.  Block-structured AMR provides a natural framework in which to focus computing power on the most critical parts of the problem in the most computationally efficient way possible.

Block-structured AMR is already widely used to solve many problems relevant to DOE. Specifically, at least six of the 22 exascale application projects announced last month—in the areas of accelerators, astrophysics, combustion, cosmology, multiphase flow and subsurface flow—will rely on block-structured AMR as part of the ECP.

Exascale refers to computing systems at least 50 times faster than the nation’s most powerful supercomputers in use today.

“This co-design center reflects the important role of adaptive mesh refinement in accurately simulating problems at scales ranging from the edges of flames to global climate to the makeup of the universe,” said David Brown, Director of Berkeley Lab’s Computational Research Division (CRD). “AMR will be a critical component in nearly a third of the 22 exascale application projects announced in September, which will help ensure that researchers can make productive use of exascale systems when they are deployed.”

The cross-disciplinary project will draw on staff expertise in the Applied Mathematics and Computer Science departments in CRD.

The ECP is responsible for the planning, execution, and delivery of technologies necessary for a capable exascale ecosystem, including software, applications, hardware, and early testbed platforms, to support the nation’s exascale imperative. Exascale refers to high-performance computing systems capable of at least a billion billion calculations per second, (1018) or a factor of 50 times faster than the nation’s most powerful supercomputers in use today.

The development of capable exascale systems requires an interdisciplinary engineering approach in which the developers of the software ecosystem, the hardware technology, and a new generation of computational science applications are collaboratively involved in a participatory design process referred to as co-design. The co-design process is paramount to ensuring that future exascale applications adequately reflect the complex interactions and trade-offs associated with the many new and sometimes conflicting design options, enabling these applications to tackle problems they currently can’t address.

“The establishment of these and future co‑design centers is foundational to the creation of an integrated, usable, and useful exascale ecosystem,” said ECP Director Paul Messina. “The establishment of these co-design centers, following on the heels of our recent application development awards, signals the momentum and direction of ECP as we bring together the necessary ecosystem and infrastructure to drive the nation’s exascale imperative.”

Berkeley Lab has extensive expertise in AMR and other applied math research areas. The Center for Computational Sciences and Engineering, which Bell previously led, and the Applied Numerical Algorithms Group have respectively developed BoxLib and Chombo, two of the leading AMR frameworks used by the U.S. research community.