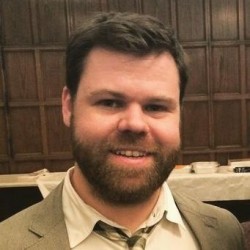 As a member of NERSC’s Application Performance Group, Brandon Cook will provide HPC support for the facility’s users, help the NERSC Exascale Applications Program (NESAP) teams prepare for computing on next-generation architectures and contribute to the development of user web interfaces.

Before coming to Berkeley Lab, Cook was a postdoc at the Oak Ridge National Laboratory where he studied and applied scalable methods for electronic structure calculations, particularly on machines graphics processing unit (GPU) accelerators.

“I have been interested in computing since I had a Commodore 64 as a kid, which I programmed in BASIC. Since then, I was always drawn to the computational side of science,” says Cook.

Born and raised in Maryland, Cook earned his undergraduate degree in mathematics and physics from Lynchburg College in Virginia. Then, he went on to pursue his Ph.D. in physics from Vanderbilt University in Tennessee.

As a NESAP (NERSC Exascale Applications Program) postdoctoral fellow, Mathieu Lobet will work on optimizing the Particle-In-Cell (PIC) framework WARP, a component of the Berkeley Lab Accelerator Simulation Toolkit that was partially developed by Berkeley Lab’s ATAP Division, to run on next-generation supercomputers like the facility’s CORI system.

A native of France, Lobet obtained a Masters degree in mathematical and mechanics modeling from the ENSEIRB-MATMECA engineering school in Bordeaux with specializations in fluid dynamics, plasma physics, numerical analysis and high performance computing. He then went on to pursue his Ph.D. at the CEA near Paris in collaboration with the CELIA laboratory also in Bordeaux. His work at CEA focused on the physics of laser-matter interaction and numerical simulation.

He notes that his interest in computing spared when he was about 12 years old. “At this time, I was going to my friend's who had the chance to have a computer and we were mainly playing little video games, drawing with graphics software or watching his father’s developments. I got my first computer at 15. I taught myself, using the Internet, how to make little programs,” he says. “I was also highly interested in physics and math and this is the reason why I studied science rather than software and web development.“

This month, William Arndt joins NERSC as a postdoctoral fellow where he will modify the HMMER algorithm to run on the facility’s Cori system. HMMER is a biological sequence search tool that is frequently used by researchers at the Joint Genome Institute to annotate new genome sequences.

Born and raised in Pittsburgh, Arndt moved South Carolina to pursue his undergraduate and doctorate degrees at the University of South Carolina-Columbia. In graduate school, he focused on the development and analysis of algorithms used to solve biology problems. After obtaining his Ph.D. in computer science, he spent almost two years at the Howard Hughes Medical Institute where he worked on data processing scripts that support HMMER.org.

“Being in the lab for 20 months, I got a first-hand view of how HMMER works and is maintained. I also formed personal relationships, which will aid and guide my current work,” says Arndt.

He notes that his interest in computing sparked as a child playing computer games.  “My father is an electrical engineer by trade so there has always been a computer in our home. My dad purchased a copy of ‘Absolute Beginner's Guide to C’ and showed me how to use a copy of Borland Turbo C that he smuggled home from work. After that point the pattern was to follow some of the book until I gave up in frustration, wait for my abstract thinking to get better such that I could progress a bit further, then repeat to the point that I was a reasonable programmer by the end of high school with no understanding of theory,” says Arndt.

In his free time, Arndt likes to explore the Bay Area on foot, paint with watercolors and work on his science fiction novel.

As a new consultant in the NERSC User Engagement Group, Stephen Leak will help the facility’s users effectively harness HPC resources to achieve their research goals. He will also work on getting key applications ready to run on phase II of Cori, NERSC’s next-generation supercomputer.

Before joining NERSC, Leak was part of the HPC team at New York University (NYU) where he provided user and application support. Most of his work was dedicated to ensuring that the system’s felt responsive and easy to use from a user perspective, and he achieved this mostly through monitoring and tweaking of the batch system setup and through quick response to support requests. Prior to that, he spent 10 years doing pre-sales benchmarking for NEC supercomputers, which involved making applications run well on non-commodity architectures. He also spent four years at Australia’s Commonwealth Scientific and Industrial Research Organization (CSIRO) working on HPC application performance.

“I was fortunate enough to have a 64KB computer at home while growing up, which triggered an interest in computers and programming. I then discovered HPC during a final-year project at RMIT University in Melbourne, Australia, and was offered a place in a Master's program there. In Australia at the time HPC was a very small field so I started the degree in order to spend a bit more time with HPC before ‘getting a real job.’  Along the way an opportunity for a career in HPC arose, so I deferred study to join NEC's HPC team, and returned later to finish my degree,” says Leak.

Originally from Melbourne, Leak moved to the U.S. two years ago to join NYU’s HPC team. In his spare time, he enjoys paragliding, bicycling and exploring Northern California.

As a computer systems engineer in Berkeley Lab’s Scientific Data Management group, Dongeun Lee will be working on streaming analytics of smart grid data. Specifically, he will look into distributed online algorithms that can learn sparse representations of smart grid data.

Although Lee officially began his post as a computer systems engineer this month, he’s no stranger to Berkeley Lab. Last summer, he worked in the Scientific Data Management group as a postdoctoral research affiliate.

“I chose computer science and engineering as my major because it seemed cool. But as my studies progressed, I became more interested and even decided to pursue a PhD in the field,” says Lee. “And, now I can say that I love my research.”

Born and raised in Korea, Lee earned his Bachelors degree in computer science and engineering, and Doctorate in electrical engineering and computer science from Seoul National University in 2006 and 2014, respectively. He then went on to work for Ulsan National Institute of Science and Technology (UNIST) in Korea, where he researched compressive sensing and machine learning.