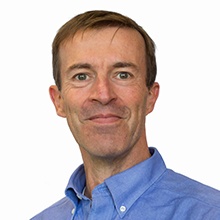 As a new HPC Consultant at NERSC, Tony Wildish supports the Joint Genome Institute. Originally from England, Wildish has spent most of his career at CERN in Geneva, Switzerland.

Shortly after obtaining his Ph.D. in High Energy Physics from Imperial College, London, Wildish went to CERN as a fellow in the ALEPH Online Group. Eventually, he moved on to the LHC’s ATLAS and CMS experiments. Initially, he worked on the Monte Carlo production system for the CMS experiment, which produces simulated events on computing clusters distributed around the world.  And most recently, he managed the software that distributes data from the LHC’s CMS experiment among the sites that participate in the physics analysis. Wildish notes that CMS has been transferring over 1petabyte of data per week, every week, for about six years.

“My first experience with computing came from building a Sinclair ZX-81 from a kit while I was at school. Programming in BASIC and Z80 machine code was quite an experience, and having only 64 KB of RAM meant I had to write efficient code from the beginning,” says Wildish. “My interest in computing really took off after my PhD, when I wrote software for the data-acquisition system for ALEPH. I found I enjoyed writing software to solve difficult problems, and made the transition from physics to scientific computing.”

In addition to playing with computers, Wildish also enjoys gardening, in particular growing cacti. In his spare time, he looks forward to exploring Bay Area hills and getting to know more about local plants, birds and animals.