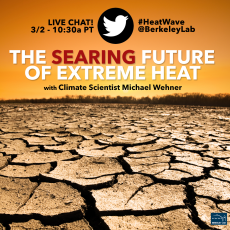 UPDATE: Michael Wehner will be taking over Berkeley Lab's Twitter account on 3/2 at 10:30 a.m. PST to answer your questions. Tag @BerkeleyLab and #Heatwave to join the conversation.

Heat waves that typically strike once every 20 years could become yearly events across 60 percent of Earth's land surface by 2075, if greenhouse gas emissions continue unchecked.

If stringent emissions-reductions measures are put in place, however, these extreme heat events could be reduced significantly. Even so, 18 percent of global land areas would still be subjected yearly to these intense heat waves, defined as three exceptionally hot days in a row.

These are among the findings of a new study by Claudia Tebaldi of the National Center for Atmospheric Research and Michael Wehner of the Lawrence Berkeley National Laboratory (Berkeley Lab). The study, funded by the U.S. Department of Energy (DOE) and published in the journal Climatic Change, quantified the benefits society would reap, in terms of avoiding extreme heat events, if action is taken now to mitigate climate change.

"The study shows that aggressive cuts in greenhouse gas emissions will translate into sizable benefits starting in the middle of the century for both the number and intensity of extreme heat events," Tebaldi said. "Even though heat waves are on the rise, we still have time to avoid a large portion of the impacts."

For the study, Tebaldi and Wehner used data generated by the NCAR-based Community Earth System Model to study 20-year extreme heat events—those that have a one-in-twenty chance of occurring in a given year. The model was developed with support from the DOE and the National Science Foundation, NCAR’s sponsor.

Besides finding that today's 20-year heat waves could become annual occurrences across more than half of the world's land areas by 2075, as noted above, the study also concluded that heat waves with a one-in-twenty chance of occurring during a future year will be much more extreme than heat waves with the same probability of occurring today.

A few degrees may not seem like much on a mild day, but during extreme heat events, they can mean the difference between life and death for vulnerable populations, Wehner said.

By 2075, the situation is likely to become much more dire without emissions reductions. The percent of land areas subject to 20-year events that are at least 5 degrees Celsius (9 degrees Fahrenheit) hotter swells from 10 to 54 percent.

However, if emissions are aggressively cut, the severity of these 20-year events could be significantly reduced over the majority of the world, though portions of the Earth would still face dangerous heat extremes. For example, in 2075, 24 percent—instead of 54 percent—of land areas could experience 20-year heat waves that are at least 5 degrees Celsius (9 degrees Fahrenheit) hotter than today's.  “But even with such dramatic reductions in carbon dioxide emissions, future heat waves will be far more dangerous than they are now,” says Wehner.

The researchers also looked at single-day extreme heat events, as well as single-day and three-day blocks when the low temperature remained exceptionally warm. Past research has shown that human health is especially endangered when temperatures do not cool off significantly at night. All of these events had similar increases in frequency and intensity.

The fact that extreme heat events are expected to increase in the future as the climate changes—and the fact that emission reductions could ameliorate that increase—is not a surprise, Tebaldi said. But this study is important because it puts hard numbers to the problem.

"There is a cost attached to reducing emissions," Tebaldi said. "Decision-makers are interested in being able to quantify the expected benefits of reductions so they can do a cost-benefit analysis."

This paper is a joint effort between DOE’s Calibrated and Systematic Characterization, Attribution and Detection of Extremes (CASCADE) initiative and an NCAR-based project called Benefits of Reduced Anthropogenic Climate Change (BRACE).

CASCADE is a three-year multi-organizational project based at Berkeley Lab to advance scientific capabilities in studying climate extremes and in conducting extreme climate analysis. Wehner leads the program’s efforts to detect and attribute extremes in data and models.

BRACE  is organized by NCAR scientist Brian O'Neill, researchers from across NCAR and partner organizations are working to quantify how emission reductions may affect health, agriculture, tropical cyclones, sea level rise, and drought, as well as heat extremes. BRACE is the first activity of NCAR's Climate and Human Systems Project, and effort to integrate research on human and Earth systems.

This work was supported by the DOE Office of Science.

Read the paper: Benefits of mitigation for future heat extremes under RCP4.5 compared to RCP8.5