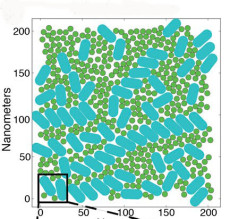 The results from this model, published January 18 in the Proceedings of the National Academy of Sciences, point the way to improving the yields of food and fuel crops and developing artificial photosynthesis technologies for next generation solar energy systems. Computational work for this research was carried out at NERSC.

The new model simulates light-harvesting across several hundred nanometers of a thylakoid membrane, which is the membrane within a chloroplast that harbors photosystem II (PSII), a complex of antennae made up of mostly of chlorophyll-containing proteins. The antennae in PSII gain “excitation” energy when they absorb sunlight and, through quantum mechanical effects, almost instantaneously transport this extra energy to reaction centers for conversion into chemical energy. Previous models of PSII simulated energy transport within a single antenna protein.

“Our model, which looked at some 10,000 proteins containing about 100,000 chlorophyll molecules, is the first to simulate a region of the PSII membrane large enough to represent behavior in a chloroplast while respecting and using both the quantum dynamics and the spatial structure of the membrane’s components,” said chemist Graham Fleming, who oversaw the development of this model and is a world authority on the quantum dynamics of photosynthesis. He holds appointments with Berkeley Lab, UC Berkeley and the Kavli Energy NanoScience Institute at Berkeley. “We use insights from structural biology, advanced spectroscopy and theory to reproduce observed phenomena spanning from one nanometer to hundreds of nanometers, and from ten femtoseconds to one nanosecond. This enables us to explain the mechanisms underlying the high quantum efficiency of PSII light harvesting in ideal conditions for the first time.”

The ability of green plants to thrive in sunlight stems in part from the flexibility that PSII displays in harvesting solar energy. At low levels of light, through quantum processes that have been modeled by Fleming and coworkers, a photon of sunlight can be utilized for creation of chemical energy with more than 90-percent probability. Thanks to a protective mechanism known as “energy-dependent quenching,” PSII is able to ensure that a plant absorbs only the amount of solar energy it needs while excess energy that might damage the plant is safely dissipated.

Earlier work by Fleming and his research group revealed a molecular mechanism by which PSII is able to act as a sort of photosynthetic “dimmer switch” to regulate the amount of solar energy transported to the reaction center. However, this work was done for a single PSII antenna and did not reflect how these mechanisms might affect the transport of energy across assemblies of antennae, which in turn would affect the photochemical yield in the reaction centers of a functional thylakoid membrane.

Given that the ability of PSII to regulate the amount of solar energy being converted to chemical energy is essential for optimal plant fitness in natural sunlight, understanding this ability and learning to manipulate it is a prerequisite for systematically engineering the light-harvesting apparatus in crops. It should also be highly useful for designing artificial materials with the same flexible properties.