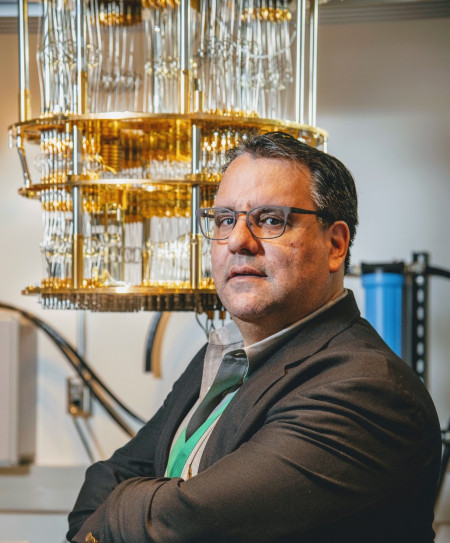 Since joining Lawrence Berkeley National Laboratory’s Advanced Quantum Testbed (AQT) in March 2019, David Santiago has been like an air traffic controller, steadily guiding each activity associated with the testbed through takeoffs, landings – and the occasional turbulence. As Science and Technology Lead for the AQT project, he’s excited by the progress that’s been made since the U.S. Department of Energy announced just a year ago that Berkeley Lab would receive $30 million over five years to build and operate the testbed. So far the project has yielded advances in materials characterization, control software, quantum algorithms, and high-quality, stable 8-qubit processors. The immediate next goal is to scale to 16-qubit processors.

“A lot of the work we are doing right now is getting ready for our first scale-up,” Santiago said. “We are moving slowly because some of the problems the big companies are having come from going too fast. We don’t want to do that. This is a hard problem, and it is going to take time.”

The ultimate goal of AQT is for researchers from the Lab and beyond to use the testbed and its technological innovations to explore superconducting quantum processors and evaluate how these devices can help revolutionize scientific research. The testbed is intended as an open resource for the user community, allowing researchers to work with superconducting architectures developed by staff and collaborators for simulations in chemistry, materials, and other scientific domains and help industry partners evaluate various materials and processes for new product development. 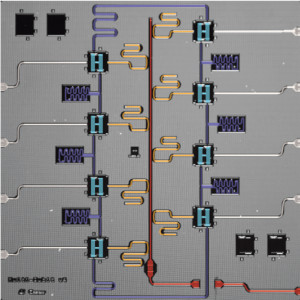 Toward this end, AQT has so far been focused on creating a multi-partner scientific collaboration and building a platform where basic questions about the viability of quantum computing could be studied and answered. The AQT team currently comprises Director Irfan Siddiqi, a Berkeley Lab scientist and professor of physics at UC Berkeley; Jonathan Carter, co-principal investigator and deputy of science for Berkeley Lab’s Computing Sciences Area; Kristin Balder-Froid, head of strategic development at Berkeley Lab; and Sarah Morgan, program coordinator. Also contributing to the project are Berkeley Lab’s Accelerator Technologies and Applied Physics Division, which is building a custom quantum control stack, and the Computational Research Division, which is developing software and custom classical computing architecture. In addition, a growing body of post-docs and technical staff are joining the team, both at the Lab and in Siddiqi’s Quantum Nanoelectronics Lab on the UC Berkeley campus.

“We are working to make the best quantum chips in the world to help the scientific community and advance science and accelerate discoveries,” said Santiago, a physicist who has worked in both the public and private sectors as a researcher and a consultant. “We probably have as many people and resources here as the big companies that are investing in quantum.”

This is not Berkeley Lab’s first foray into quantum computing and quantum information science (QIS). Over the last five years, funded by Laboratory Directed Research and Development (LDRD) grants, Berkeley Lab researchers developed quantum chemistry and optimization algorithms targeting prototype superconducting quantum processors, proving the viability of their work by running the algorithms on a quantum processor developed in Siddiqi’s lab. In 2017, the success of that LDRD-funded work paved the way for two DOE-funded projects to explore quantum computing for science. Since then, in addition to the AQT, a number of QIS projects at Berkeley Lab have attracted DOE funding. This “quantum ecosystem” now includes:

“AQT is essentially the next phase of our research to deploy quantum computing resources that are highly customizable for scientific applications,” Carter said. “This is something that started with an LDRD and continued with the Advanced Quantum-Enabled Simulation Pathfinder project.”

Santiago likens the current quantum computing R&D climate to that of the evolution of many revolutionary technologies.

“When Maxwell worked out the laws of electromagnetics, he didn’t know we were one day going to have cellular communications; it was just something to show how magnetism works and how electricity works,” he said. “And when classical computers were originally built they were to calculate trigonometry and logarithm tables, and they had to do it fast for military purposes and people couldn’t fathom that we were going to have this in our hands. This happens with all technologies; if you show you have developed a really useful technology and you demonstrate why it is useful over time, it expands your ideas.”

In addition to supporting the swath of quantum computing, networking, and QIS projects taking place across the Lab, on the UC Berkeley campus, and in conjunction with other user facilities, AQT has purchased its first refrigerator, a Bluefors system currently housed in Siddiqi’s lab on the UC Berkeley campus. Plans are under way to refurbish Berkeley Lab’s Building 73 and turn it into QIS R&D hub; once this work is completed, likely in 2020, the refrigerator will be moved to that facility and users will be able to begin running experiments both onsite and remotely. Ultimately, Santiago expects the testbed to expand capacity, with an eye toward becoming a scientific community user facility in addition to producing high-quality quantum processors.

“We want to be the first to build the most advanced quantum processor with high-fidelity operations,” he said. “Once we get to larger and more powerful processors, whatever happens after that is going to be something unimaginable and powerful and beneficial to society.”

A Quantum Leap Toward Expanding the Search for Dark Matter