Envisioning the Future of Machine Learning and Data Analytics

Some 40 early and mid-career applied mathematicians from national labs across the country came together at Lawrence Berkeley National Laboratory (Berkeley Lab) in early April to explore the big, unsolved challenges Department of Energy labs should tackle in the next 10 to 20 years. Their discussions centered on two themes: Machine learning and data analytics. 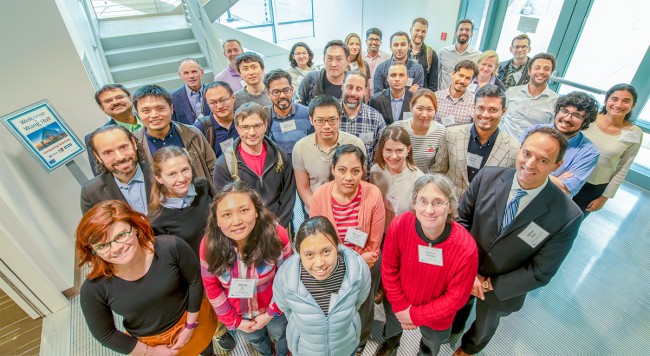 “Machine learning and data analysis techniques will be increasingly important as we seek to draw meaningful scientific conclusions from larger (and sometimes noisier) data sets," said Berkeley Lab Staff Scientist Aydın Buluç a member of the organizing committee and host of the April 2 − 3 meeting in Shyh Wang Hall. 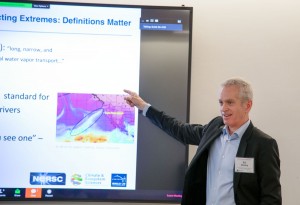 Berkeley Lab’s Bill Collins, one of four senior scientists who spoke on the workshop’s opening day, pointed out that the impact of these fields is already more than academic. Collins uses machine learning and data analytics to help understand how climate change contributes to extreme weather events. Speaking of a recent partnership to help the City of San Francisco plan for the effects of climate change, he said: “We’re starting to see ten-figure investments being made based on the numbers coming out of a model.”

Oak Ridge National Laboratory’s John Turner briefed the gathering on the challenges of modeling metal “additive manufacturing.” Similar to 3D printing using metal, the process is promising but poorly understood at the microscale, so remains prohibitively expensive. He discussed how machine learning might help.

In addition to the two senior domain scientists, two leading applied mathematicians addressed the group and seeded breakout discussions: Nathan Kutz of the University of Washington and the Pacific Northwest National Laboratory lectured on the role of artificial intelligence and machine learning in the physical sciences and engineering. Sandia’s Cynthia Phillips spoke on national security data science challenges.

The second day was devoted to break-outs, said Buluç, who expressed gratitude for the contributions of Kutz and Phillips to the discussions. The results will be documented in a white paper that summarizes current trends and challenges and lays out a shared vision for meeting those challenges over the coming decades.

A second, equally important aim of the workshop was to make cross-lab connections among researchers, said Buluç . “We work on a diverse set of problems with different expertise, so we don’t necessarily know each other,” he said. “This was a great opportunity to increase the range of our collaborations.”

Berkeley Lab’s Computational Research Division Director David Brown agreed: “This meeting was an opportunity for early and mid-career applied mathematicians from our laboratories to contribute their diverse perspectives on the outstanding scientific challenges in machine learning and analytics,” said Brown, who is a member of the Computational Research Leadership Council that sponsored the workshop. “I hope to see increased collaboration among the laboratories on these important topics as a result.”

With the success of this gathering, another workshop is expected in late summer to early fall, Buluç said.