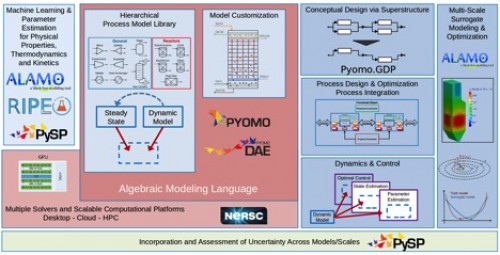 The Institute for the Design of Advanced Energy Systems (IDAES) has released the first open-source version of its next-generation computational framework and model library, created to optimize the design of process systems engineering solutions used to model advanced energy systems.

The new framework can be accessed at the IDAES website.

Led by the U.S. Department of Energy’s (DOE) National Energy Technology Laboratory (NETL), IDAES was formed in 2016 to improve the efficiency and reliability of coal-fired power plants and accelerate the development of advanced fossil energy systems. It builds on the research and partnerships formed during the Carbon Capture Simulation Initiative (also funded by DOE through the Department’s Office of Fossil Energy), to create an open-source, non-commercial framework specifically for process systems engineering.

To achieve this goal, researchers from DOE’s Lawrence Berkeley and Sandia National Laboratories, Carnegie Mellon University, and West Virginia University have been working with their counterparts at NETL to create a multi-scale modeling and optimization framework for chemical engineers working in the power industry. To accelerate adoption by the energy systems operators, there is a strong industry component via membership on the Stakeholder Advisory Board (SAB). The SAB also includes representatives from other academic and research institutions.

“The goal has been to develop a framework within which process systems engineering solutions will be modeled,” Beattie said. “Berkeley Lab is bringing the software development and software engineering perspective to IDAES that other scientists in their specific disciplines do not always have. We have a lot of users with a chemical engineering background, which is essential, but they may not have the experience or expertise to turn the models they are writing into a software package that could be used easily by other chemical engineers.”

The IDAES framework translates process engineering components in, for example, a power plant model into a mathematical model run in Pyomo, an open-source algebraic modeling language written in Python that supports a diverse set of optimization capabilities for formulating, solving, and analyzing optimization models, Gunter explained. The IDAES framework integrates the Pyomo modeling language with an extensible, equation-oriented process model library to help engineers solve large systems of modeling equations. The Pyomo algebraic modeling language in turn invokes advanced linear and non-linear solvers to perform the optimization. The data management components being developed at Berkeley Lab provide provenance (inputs, outputs, and intermediate results) for framework executions as well as a way to track and index the physical and kinetic property packages.

“The framework is a way to get from reality to the point where users can mathematically solve for solutions that minimize the constraints that are given,” Gunter said. “It is meant to be a next-generation framework that can do things current tools can’t do very easily. And it strives to be open source because it is important to allow visibility into the cutting-edge research being done in universities and national labs while accepting contributions to this framework from industry and other members of the community.”

Looking ahead, the IDAES project is working to further enhance the usability of the framework by making it scalable to high performance computing systems and integrating it with Jupyter notebooks for even smoother accessibility. They also see potential applications outside of the power plant industry and even process engineering.

“The framework is being structured in such a way that it could be extended beyond process engineering, which is a very wide field that could include any kind of process you are trying to model,” Beattie said. “We are building on top of the existing Pyomo model, with chemical engineering and process engineering components targeted at power plant modeling, but that’s not the end of the possible extensions that could exist.”

For more information about IDAES, including publications and events, please see the project website.