As the Camp Fire tore through the foothills and canyons of California’s Sierra Nevada mountains last year, it was fueled not only by high winds but also years of drought that left the landscape desperately dry and scattered with dead trees. Interspersed with a heavy grass cover due to a wet spring, the landscape was primed for burning. The fast-moving inferno scorched more than 150,000 acres and caused the death of 86 people, making it the deadliest and most destructive wildfire in California history.

The destruction from the Camp Fire and the multitude of other wildfires that have blazed through California with alarming frequency over the past few years have taken an enormous toll on the people and environment of California. Scientists at Berkeley Lab recently took a closer look at one aspect of how wildfires affect the environment: California’s watersheds. As the vegetation that holds soil in place and retains water is burned away, wildfires are changing the state’s water cycle. The absence of vegetation in the watershed can create conditions conducive to erosion and even flooding, while the acres of scorched land can make snowpack formation easier and increase water runoff downstream.

With projections of California climate showing increased wildfire frequency and magnitude, Fadji Maina and Erica Woodburn, both scientists in Berkeley Lab’s Earth and Environmental Sciences Area, used the Lab’s National Energy Research Scientific Computing Center (NERSC) to simulate how these factors would affect watersheds. Using a model based on one of California’s largest undammed watersheds, scientists ran high-performance computer (HPC) simulations to project how future wildfire events would affect hydrological processes such as stream flow, groundwater levels, and snowpack and snowmelt. Using HPC to simulate watershed dynamics over a period of one year, and assuming a 20 percent burn area based on historical occurrences, the study allowed them to identify the regions in the watershed that were most sensitive to wildfire conditions, as well as the hydrologic processes that are most affected. 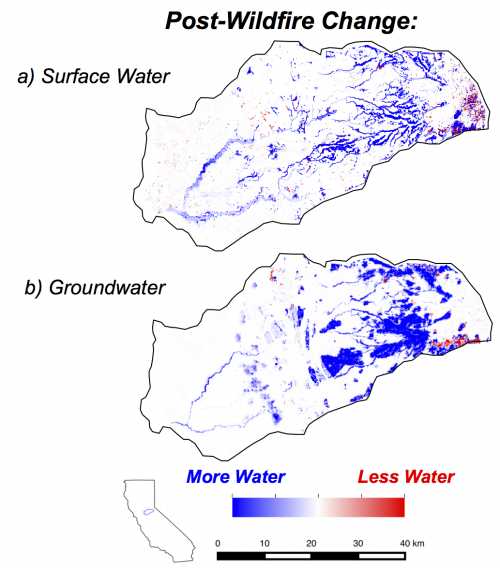 Berkeley Lab researchers found that wildfires led to non-linear and bi-directional (positive and negative) changes in surface water and groundwater, even outside of the simulated burn scar areas of the Cosumnes River watershed.

Their research, recently published in the journal Hydrological Processes, showed some informative yet counterintuitive results. Whereas evapotranspiration—the combination of evaporation from the ground, canopy surfaces, and sublimation and transpiration by plants—generally decreases in postfire simulations, some regions experience an increase due to changes in surface water run-off patterns in and near burn areas. Postfire conditions also yield greater winter snowpack and subsequently greater summer run‐off as well as groundwater storage in the postfire simulations.

“To do this kind of study you need a physics-based model that includes many variables—precipitation, temperature, vegetation dynamics, snowfall predictions, wind, geology, topography—but these types of models are computationally demanding,” said the study’s lead author, Fadji Maina, a postdoctoral fellow in Berkeley Lab’s Earth & Environmental Sciences Area. “If you want to study a whole watershed you need supercomputing.”

Scientists developed the model based on the 2,700-square-mile Cosumnes River watershed, located between Lake Tahoe and Sacramento. The simulations they ran on NERSC’s Cori system considered two different water scenarios: a dry year and a wet year. “When you are looking at wildfire potential, you really have to capture the dynamic of your system—simulating how the forest can take the water from the soil and then how wildfire affects the forest,” said Maina. “You need to solve a set of physics equations to do that, and a physics model takes time to run.

It took thousands of NERSC hours for Maina and her fellow researchers to build and initialize the model that was then used to simulate the one-year periods examined in the published paper. The model that they worked from was based on a climate change model they had developed previously and run at NERSC.

“The model we used had about 1.3 million cells and we were running it at an hourly time-step, which meant running each set of equations 1.3 million times every hour,” said Maina. “Even with supercomputing, it took 40 hours to simulate one year.

Comparisons between dry and wet water years showed that climate is the main factor controlling the timing at which some hydrologic processes occur (such as snow accumulation), whereas post-wildfire changes to other metrics (such as streamflow) show seasonally dependent impacts primarily due to the timing of snow melt, illustrative of the integrative nature of hydrologic processes across the Sierra Nevada‐Central Valley interface. Because vegetation distribution and density are key controls on evapotranspiration, it is a crucial modulator of the movement of water and energy from subsurface aquifers to the atmosphere. As such, forest disturbances from wildfire events may seriously affect watershed dynamics as well as the resilience of future water resources.

“Modeling is really important in hydrogeology—you have to be able to project into the future and you can’t do that without these computer models and the supercomputing power to run them,” said Maina.

NERSC is a U.S. Department of Energy (DOE) Office of Science user facility.