Elizabeth “Betsy” MacGowan grew up in Huntsville, Alabama in a family that valued government work. After she graduated from the University of Virginia with a degree in environmental science, her father urged her to find a government job.

But knowing that she would someday dedicate decades to a career, MacGowan decided instead to spend a few years pursuing her passion studying Buddhism. So, she packed her bags and headed West to the San Francisco Zen Center in California. Although she didn’t know it then, this choice would lead her to Berkeley Lab. After 18 years, she will retire from the Lab at the end of June.

“I’m really going to miss the people at Berkeley Lab,” said MacGowan, who spent the last 12 years as the Computing Sciences Area’s safety coordinator. “When I started in the CS Area, I was bugging people to take their JHAs, or job hazard analysis training, which was replaced by Activity Manager and Work Planning and Control. A lot of people were annoyed by that, but over time as I helped them with their ergonomics, we started to have real conversations and become friends.”

She says, “it has been an absolute pleasure to work with so many skilled and dedicated professionals, from supervisors looking out for their staff’s ergonomics safety, the building facilities group, all the computer and networking staff. Not to mention working with the equally dedicated EHS (Environmental Health and Safety) and Facilities Division professionals on projects affecting noise, ventilation, building safety, and emergency preparedness.”

MacGowan’s path to a career in safety happened accidentally. After a few years studying Buddhism, and living at Tassajara, Zen Mountain Center, she decided that it was time for a full-time job. She was hired by a local company to help with asbestos inspections at Fort Ord. During this time, she got her certification in asbestos abatement. Following the Fort Ord project, she moved to San Francisco where she was hired by a number of companies to do asbestos inspection and abatement oversight.

She notes that highlights included inspections at the historic buildings of the Presidio of San Francisco, oversight of abatement at the former SF Merchant Marine Hospital, inspections at the Jet Propulsion Laboratory, and numerous banks, warehouses, and industrial facilities such as the Hostess cake factory in San Francisco’s South of Market. One of those jobs even brought her to Berkeley Lab.

“When I was doing the asbestos projects, it was a nice combination of problem-solving, talking to people, and visiting interesting places,” said MacGowan. “At Berkeley Lab, I got to go into the old Bevatron 'igloo' before they demolished the Bevatron. The Lab is fascinating because there is so much history, brilliant researchers, dedicated support staff, and a lot of cool science going on.” 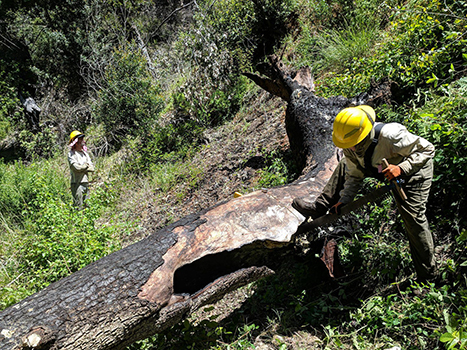 She liked the Lab environment so much, she asked around to see if there were any open positions and ended up applying for a term position in the Lab’s EHS division. MacGowan got the job and worked in EHS for six years and became certified as an Industrial Hygienist and Safety Professional. In 2008, then she left EHS to become the CS area’s safety coordinator, reporting to Michael Banda.

“I’ve always been interested in safety. I like the idea of figuring out why accidents happen and what you have to do to prevent them. In Computing Sciences, there are a lot of interesting safety challenges. In the NERSC machine room for example, there are unique hazards because of earthquakes, fire risks, and electrical components,” she said. “They say that Berkeley Lab epitomizes team science, my role as a safety coordinator has been working at the intersection of all those teams, making sure that the equipment is safe and that everyone has the proper training to use it. It’s been really fun to work with people and support people in their quest for scientific breakthroughs.”

Aside from her safety duties, MacGowan also thought of creative ways to fill the needs of computing sciences staff. Whether it was creating online training for the unique hazards of work in the computer rooms, holding onto ergonomic furniture so that it would be available to someone else who might need it, or creating and printing monthly fliers with safety tips for all CS staff restrooms. She has also been an active member of Berkeley Lab’s All Access Employee Resource Group, which advocates for a more accessible laboratory in design, in spirit, and in operation.

In retirement, MacGowan plans to move back to Monterey and continue her work with the Ventana Wilderness Alliance, which protects the wildlands of California's northern Santa Lucia mountain range. She also plans to do a lot of hiking and trail work, clearing hiking trails and brush in the wildlands near Monterey, a hobby that she picked up during her time at Tassajara.