Ask Craig Tull how long he’s been working at Berkeley Lab and he’ll tell you either 25 or 38 years; it depends on how you count it. In that time, he’s worked in six different departments and even spent three years managing the Department of Energy’s (DOE) computational high energy physics portfolio. He was also an early advocate for including computing infrastructure plans in proposals for new accelerator experiments. He will retire this year at the end of June.

“I’ve been extremely happy and proud to work at Berkeley Lab,” said Tull. “It has some of the best, most conscientious, and most admirable people and scientists I’ve ever had the pleasure of knowing. It’s been a place of inspiration, a place that has always held itself up to the highest scientific and ethical standards. It’s been an honor to spend my career here.”

Tull is extremely passionate about physics and computing, and ultimately carved out a career merging these interests. He has always enjoyed the intellectual challenge of physics and its promise to explain the fundamental forces of the universe. He discovered his love for computing as a teenager.

“It was 1973 or ’74 and a local university had a 16-bit Programmed Data Processor (PDP) that read data cards and ran a very old version of Fortran. I took the class and really enjoyed it, so I’ve been programming and working with computers ever since,” said Tull.

As an undergraduate at Ohio Wesleyan University, he double-majored in math and physics because there was no computer science major. But he kept up with his self-directed computing education and eventually did his physics senior thesis in Pascal on an embedded 8088 computer chip.

After his postdoc, Tull was hired as a staff scientist in Berkeley Lab’s IT division to develop and manage scientific software for the STAR project, which was designed to explore the physics of relativistic heavy ion collisions.

Shortly after the National Energy Research Scientific Computing Center (NERSC) came to Berkeley Lab in the late-1990s, Tull convinced its management to stand up a Linux cluster for physics research. The resulting Parallel Distributed Systems Facility (PDSF) cluster served as a steady workhorse supporting groundbreaking and even Nobel-winning research until it was shut down in 2018. Early on, Tull managed the team that supported PDSF. 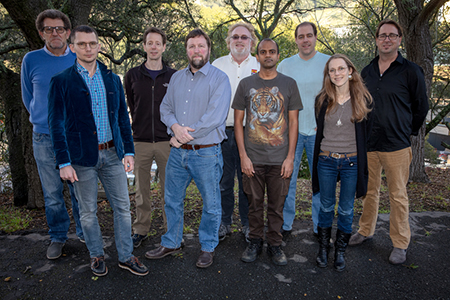 “When I first proposed PDSF in the 1990s, a lot of people thought it was the craziest thing in the world. Back then, the companies had their own operating systems and proprietary source codes, and they couldn’t imagine anyone programming in Linux. But the engineers were ahead of the companies at the time; they knew Linux allowed them to invoke more flexibility and power. Now everything runs on Linux.” said Tull.

After his stint at NERSC, Tull moved over to the Lab’s Computational Research Division (CRD), where he led software framework development for a number of international collaborations, including Berkeley Lab’s contribution to the ATLAS framework. ATLAS is one of the Large Hadron Collider general-purpose experiments, and it helped spot the elusive Higgs Boson. He was the US manager of Software and Computing for the Daya Bay neutrino experiment in China and led Software and Computing for the Lux-Zeplin (LZ) experiment now ramping up to take data one mile underground in South Dakota.

“When I was in Germantown, I was the first one to emphasize strongly that the three technologies physicists rely upon these days are accelerator, detector, and computer technology,” said Tull. “It was under my work there that they actually categorized computing under research, beside the accelerators and detectors that have always been there. This helped ensure that the computing infrastructure wouldn’t be an afterthought in the design of experiments, but rather they’d be developed together.”

Looking back, Tull says he will miss the intellectual and scientific curiosity at the Lab. “Because this is a multidisciplinary Lab, there aren’t many topics of scientific endeavor that you can’t get involved in or learn about; from genomics to computing, there are literally thousands of topics to choose from. There’s no place else in the world with this kind of brain trust. There are a lot of great people here.”

Because of the global pandemic, Tull will spend his first months in retirement doing home improvement projects. Eventually, he plans on traveling the world, trying new foods, going to the theater, and picking up new hobbies.