As co-creator of the twice-yearly TOP500 List, he's raised awareness of HPC's role in modern science One of Erich Strohmaier's first realizations, when he came to the United States in 1995, was that despite what his guidebook told him, the wooded areas of East Tennessee weren't all that much like the Bavarian forests he grew up in.

But it worked out for him, which seems to be a pattern in his life. He was waiting in a restaurant in Southern California when he struck up a conversation with a woman who was also waiting for someone. The random encounter led to marriage.

After turning down one job offer from Berkeley Lab in the late 1990s, Strohmaier applied for another one and joined the Future Technologies Group in 2001. That worked out as well and in June, he will retire from the lab after 12 years of leading the group, which has since been split into the Performance and Algorithms Research Group and the Computer Languages & Systems Software Group.

"I'm ready to do something else and I think it's better to do it sooner rather than later," Strohmaier said. "I will remain an affiliate at the lab so I can maintain an academic connection, listening to talks, and maybe giving a presentation now and then."

Like many folks approaching retirement, Strohmaier and his wife had been mapping out travel ideas, with trips alternating between Europe and Asia, with some domestic travel thrown in. But the COVID-19 pandemic has caused them to hit the pause button for now. Fortunately, they were able to celebrate the annual cherry blossom festival in Japan last year.

He also plans to continue working with the TOP500 List of the world's most powerful supercomputers. That's another thing that started off as a small project in 1993 and has taken on a life of its own.

The Start of Something Big

Strohmaier's introduction to high performance computing (HPC) came as he was earning his Ph.D.  in theoretical physics at the University of Heidelberg. Since his thesis focused on numerical methods in elementary particle physics, he used the largest supercomputers available to him. After earning his degree, he accepted a research position in HPC at the University of Mannheim for a new project comparing the performance of a number of physics applications on a Fujitsu VP2600 supercomputer.

On the first day of his new job, he attended a small university conference, the “Mannheimer Supercomputer Seminar” organized by Prof. Hans Meuer and Dr. Hans-Martin Wacker. One of his duties while working for Prof. Meuer was to assemble statistics on worldwide supercomputers in preparation for the seminar in June 1993. Thinking it would be a one-time deal, Strohmaier created a database on his computer for just that. But then Meuer and Strohmaier decided to see how much the list would change in five months and recalculated the list in time to present the results at the 1993 Supercomputing conference held in November in Portland, Oregon. The TOP500 list of the world’s top supercomputers was born.

Since then, Strohmaier's presentation of the twice-yearly TOP500 list has become a hallmark of both the International Supercomputing held every June in Germany and the SC conference held every November in the U.S. The TOP500 list ranks supercomputers on their performance in running the Linpack benchmark application.

"Erich has been secret of the success of the list, first as a postdoc with Hans Meuer, then again with Jack Dongarra, and then a scientist at NERSC and Berkeley Lab,” said Berkeley Lab Deputy Director for Research Horst Simon, who is also a co-editor of the list. “For almost 30 years, he has provided the consistency that made the list a success and a yardstick of the progress in supercomputing. He is a great colleague and friend and it's been a joy working with him to experience the excitement of new developments in HPC, from the days of teraflops to the dawn of exascale computing."

The list, and increasing role of supercomputers in scientific research, gained a much higher profile in June 2002 when Japan's Earth Simulator system assumed the top position, knocking off the ASCI White machine at Lawrence Livermore. The launch of the Earth Simulator, which held on to the No. 1 spot for five consecutive lists, spurred greater computing investments by the U.S. government. Similar ripples shook the community when China's Tianhe-1 and Tianhe-2 systems took the top position in November 2010 and June 2013 respectively. 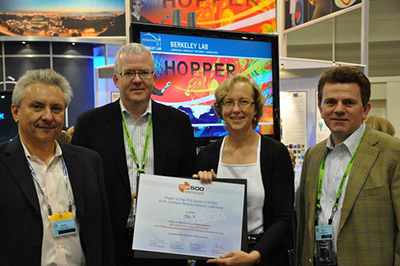 In 1995, as his research funding at Mannheim was ending, Strohmaier decided to look for a position in the U.S He consulted a German travel guide, which likened the forests around Strohmaier's home city of Passau in Bavaria with those in eastern Tennessee. He ended up working as a postdoc with Linpack author and fellow TOP500 editor Jack Dongarra at the University of Tennessee.

At the time, Strohmaier expected his stay in the States to be temporary. While living in Tennessee, a Belgian friend told him that something happens after you've been living in the U.S. for about three years and you have to either decide to leave or you will be staying. He ended up staying, but not in Tennessee.

He had connections with researchers at Berkeley Lab and applied for a job. He was offered the position but decided it wasn't the right fit and turned it down. He applied for another position but didn't get it. He later applied again and was finally hired into the Future Technologies Group.

"The third time was the charm," he said.

He was subsequently promoted to lead the group and sees the group's success as one of his top three successes at the lab.

He also points to his role as principal investigator for the Extreme-Scale Scientific Workflow Analysis and Prediction (X-SWAP) project, which looked at systematic ways to assess and improve the performance of distributed extreme-scale science workflows. The approach focused on observed end-to-end performance of current large scientific workflows and predictions of performance for future extreme-scale workflows.

The project brought together scientists from computer science, experiments at light-sources (the ALS at Berkeley and LCLS at SLAC), astronomical surveys ( the Palomar Transient Factory at Berkeley and Large Synoptic Survey Telescope at SLAC), and genomic sequence production at the Joint Genome Institute (JGI). The team used testbeds at NERSC and ESnet to verify its methods.

"One of my traits is that I really need to sink my teeth into things and X-SWAP was exactly that kind of project," he said. "We worked with scientists to learn how to better analyze experimental data and we had a great collegial atmosphere."

He said his work on the TOP500 list satisfies another one of his traits; to stick to his guns and see things through to the end.

That same drive served him well when he and his wife took a trekking vacation in Bhutan about 10 years ago. The trip was led by Robert Thurman, an author, and academic who has written and translated several books on Tibetan Buddhism (and father of actress Uma Thurman.)

"That was one of the best trips I've ever been on," Strohmaier said. To remind them of the trip, they brought back three traditional silk paintings of Buddhist deities that hang in their Oakland Hills home, though that may change.

One possibility is a move to Los Angeles, where Strohmaier's wife has family. They've been checking real estate prices in West LA, but the situation is blurred by the current pandemic. Strohmaier thinks they may do a test-relocation for a few months to get a feel for living in the Southland.

Whatever they choose to do, it will probably work out fine.