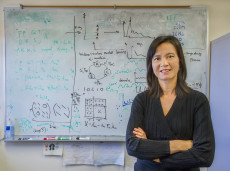 “Sherry is an internationally recognized mathematician and computer scientist who is well-known and respected in the math software community,” said Lori Diachin, ECP Deputy Director, in a news release announcing the management changes.

“We are fortunate to have such an incredibly seasoned, knowledgeable, and respected staff to help us lead the ECP efforts in bringing the nation’s first exascale computing software environment to fruition,” added Mike Heroux, director of ECP Software Technology.

Over the last two decades, Li has been instrumental in the development and adoption of multiple mathematical libraries for high performance computing applications - notably SuperLU, a widely used solver library she originally started working on during her PhD that has been in  use internationally for 20 years. She is also principal investigator for the ECP’s STRUMPACK/SuperLU/FFTX subproject.

In recent years, those involved in the ECP Math Libraries have been focused on making the libraries suitable for exascale machines, with a particular emphasis on programming and porting the codes to GPUs, Li noted. “There are currently six ECP projects in the Math Libraries section, and as the supercomputers become increasingly powerful , we are having to redesign the algorithms to make them more scalable,” she said.

The software developers have also been working on new functionalities in response to emerging applications such as machine learning and deep learning.

“So on the one side we are improving the existing capabilities of these libraries for the bigger machines, while on the other side we are developing new mathematical algorithms,” Li said. “My role will now be to ensure that all these projects reach their milestones and satisfy the needs of the high-level application codes.”