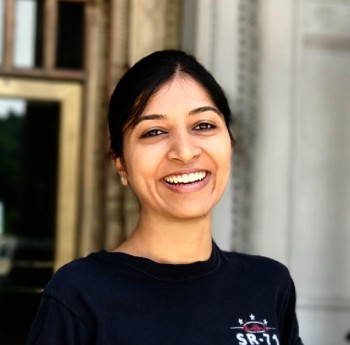 What starts out 10 times the size of our sun, runs out of fuel, and collapses into a dense object about the size of Berkeley?

Jambunathan, who was the only Computing Sciences postdoc among a dozen SLAM finalists, works on the development of WarpX. The electromagnetic particle-in-cell code is used primarily for simulations of advanced plasma wake-field accelerators using advanced algorithms, but Jambunathan is working to expand its use to astrophysics.

“Recently, we have started extending WarpX to also simulate particle acceleration in astrophysical processes, such as pulsar magnetospheres and magnetic reconnection,” Jambunathan said. “The fact that AMReX and WarpX are open-source codes that will benefit a broader plasma community makes this work even more satisfying.”

The mysterious objects at the heart of Jambunathan's talk spin faster than a Formula 1 car engine even though just a teaspoon of these objects weighs as much as Mt. Everest. WarpX can help address the computational challenges of modeling these objects, which will further our understanding of the Universe.

Revathi Jambunathan delivered her talk to a live audience via Zoom. Like all SLAM participants, she was allowed one slide and three minutes to wow the judges.

The SLAM's second-place prize, a tie, went to Sara Gushgari-Doyle, Earth & Environmental Sciences, and Mariah Parker, Energy Sciences. The People's Choice, the finalist that had the most votes from the audience, was Jonelle Basso, Biosciences Area.