Ten Billion Light Years Away, A Gang of Supernovae Reveals a Cosmic Secret 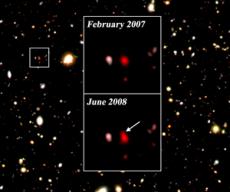 The type 1a supernova in the inset above exploded some 10 billion years ago and is one of the oldest and farthest type 1a supernova observed to date. Except for a handful of stars, all of the objects in this image are galaxies.

An international team of astronomers has exposed the largest sample of distant supernovae ever found—150 events, many of which are located about 10 billion light years away from Earth. These events reveal that a particular breed of cosmic explosions, called Type 1a supernovae, occurred five times more frequently when the universe was young than they do today. The paper, authored by a team of American, Israeli and Japanese astronomers, was published in the October 2011 issue of Monthly Notices of the Royal Astronomical Society (MNRAS).

Supernovae are important because they produce essentially all elements in the Universe that are heavier than oxygen. Because Type 1a supernovae are consistent in their intrinsic brightness and in their other observed properties across the cosmos, astronomers use them as “standard candles” to determine the distance of objects in the sky. In fact, Type 1a events were crucial evidence for showing that the universe is accelerating in its expansion under influence of dark energy, a result which earned the discoverers the 2011 Nobel Prize in Physics today (Tuesday, Oct. 4).

"Over the past decade we used Type 1a supernovae to determine that the universe is actually accelerating in its expansion, under the influence of mysterious dark energy, but the nature of these events themselves is poorly understood and there is a fierce debate about how these explosions ignite," says co-author Dovi Poznanski, an Einstein Postdoctoral Fellow at the Lawrence Berkeley National Laboratory's (Berkeley Lab's) Computational Cosmology Center.

"Recently, our Palomar Transient Factory discovered the closest Type 1a supernova in 25 years, just 21 million light years away in the Pinwheel Galaxy. It’s exciting for us to be able to study supernovae that are among the nearest, and now some of the most distant in the Universe, to see how their properties may have evolved with time," says co-author Alex Filippenko, a Professor of Astronomy at the University of California, Berkeley (UCB) and member of the Palomar Transient Factory team.

To find the distant samples, an international team of astronomers exploited the enormous light collecting power of the Subaru Telescope's Prime Focus Camera (Suprime-Cam) on four separate occasions. They pointed the ground-based telescope, located atop Hawaii’s Mauna Kea, toward a single field in the sky that was approximately the size of the full moon. Each run yielded about 40 supernovae among 150,000 galaxies. 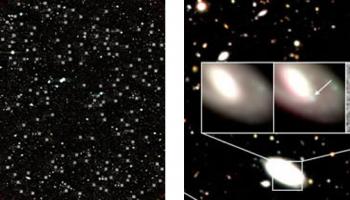 Left image: The Subaru Deep Field, is a 0.25-square-degree field composed of 150,000 galaxies. Right image: One the 150 supernovae collected in the team’s sample. This is an inset from the deep field image.

Then they used the Keck telescopes, also located on Mauna Kea, to observe the galaxies where these explosions occurred. These observations were crucial for pinpointing the distance of these events.

Most astronomers agree that these events occur in binary systems with two stars, but while some suspect that the supernovae occur when the corpse of an old star, called a white dwarf, gravitationally attracts matter from its companion star until it reaches a critical mass and explodes, others argue that Type 1a explosions occur when two white dwarfs merge. The research published in MNRAS favors the white dwarf merger scenario for Type 1a supernova events. However, they note that future observations with the Hyper Suprime-Cam, which will be mounted on the Subaru Telescope, will be able to discover even larger and more distant supernova samples to test this conclusion.

"Our sample provides clues for solving this mystery by revealing the range of ages of the stars that explode in this way. You really need a large sample of supernovae across large cosmic distances to compare their properties and determine why they explode," says Poznanski.

Poznanski began working on this project several years ago while he was a pursuing his doctorate in Physics and Astronomy from Tel-Aviv University in Israel. When he earned his doctorate in 2007 and began a postdoctoral position with Filippenko at UCB and then at the Berkeley Lab, another Tel-Aviv graduate student, Or Graur, picked up where he left off.