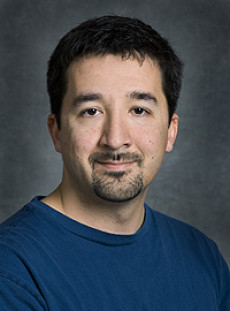 Moving into a new dig — a larger and airy space with a window — represents a fresh start for Rollin Thomas, a new CRD researcher who will spend the next several years analyzing the physics of exploding stars.

Not that Thomas is new to Berkeley Lab. After graduating from the University of Oklahoma in 2003, Thomas joined the Nearby Supernova Factory, a collaboration among Berkeley Lab and several other institutions in the United States and France. But these days, Thomas is gearing up for a different set of challenges as a 2007 Luis W. Alvarez Fellow in Computing Sciences.

The computational science fellowship provides an opportunity for Thomas to further the work that he began at the Nearby Supernova Factory. He has joined the newly formed Computational Cosmology Center, which brings together scientists in the Computational Research Division and Physics Division.

“He received his Ph. D. at the University of Oklahoma in physics with a concentration in astronomy and has extensive computational expertise in massively parallel supernova simulations,” said Peter Nugent, who is co-leading the center with Julian Borrill.

Thomas will work closely with Nugent, who also received his Ph.D. in physics, with a concentration on astronomy, from the University of Oklahoma, as well as Dan Kasen, a Hubble Fellow at UC Santa Cruz.

The center bridges theory and experiment in supernova research. The theorists develop computational tools and use supercomputers to model supernovae, while scientists on the other side look for empirical relations among observational data.

“Somewhere in between, there are people who have to reconcile the models with the observations — that’s where I live,” said Thomas, who will use supercomputing resources at NERSC to develop techniques for analyzing the large amount of data collected by the Nearby Supernova Factory.

His attraction to objects in the sky started when he was a boy. Thomas got his first telescope for Christmas in 1981, when he was in the first grade. The refractor telescope brought him a close-up look of the moon and Venus and a life-long love for learning about the universe.

Watching the night sky wasn’t the only hobby for the young Thomas. He also spent a lot of time in front of a computer. The two interests would pave the way for him to pursue the field of computational astrophysics later on.

Thomas attended Purdue University, where he graduated with a bachelor’s degree in physics in 1997. While studying physics, he also studied Russian. He enjoyed learning foreign languages and took German and Spanish in high school. “They were fun — I had a knack for it,” Thomas said.

In fact, he flirted with the idea of becoming a linguist. But a linguist doesn’t earn much money, and being an astrophysicist still held a strong appeal. Then in 1996, he met David Branch, a professor at the University of Oklahoma who would become his dissertation advisor.

Well loved by students partly for his willingness to let them be lead authors of scientific papers, Branch introduced Thomas to the world of supernovae.

“I really liked going to talk to him,” Thomas recalled. “He didn’t have to try very hard to convince me to go to graduate school at Oklahoma.”

It was an exciting time to jump into the supernova research. Scientists around the world were racing to answer a big question: Is the universe expanding at a slower pace than before? Many researchers thought so. It wasn’t until 1998 that two international teams of scientists independently demonstrated that the expansion was in fact accelerating. Nugent was on one of the teams, led by Berkeley Lab’s Saul Perlmutter.

The breakthroughs wouldn’t have been possible without using data about a class of exploding white dwarf stars called Type Ia. The Type Ia supernovae are good tools for measuring cosmological distance because they have a known luminosity, the amount of energy radiated over time. As the universe expands, the brightness begins to dim to observers on Earth, and the light’s wavelength starts to shift toward the red end of the spectrum.

But more work needs to be done to better understand the brightness and other features of the supernovae, research that would make Type Ia an even more precise measurement for determining the rate of the universe’s expansion. That’s the mission of the Nearby Supernova Factory, which had just gotten started when Thomas joined in 2003.

Thomas worked on amassing those observational data from the 1.2-meter telescope at the Palomar Observatory in Southern California. He also helped to collect the follow-up spectroscopic data from the 2.2-meter telescope at Mauna Kea in Hawaii. Because such stellar explosions only take place a few times per millennium in each galaxy, scientists are keen on capturing those rare occurrences.

These days, the Nearby Supernova Factory, led by Greg Aldering, is a rich depository of the Type Ia supernova data.

“Scientists for the most part have concentrated on studying the individual supernovae they were fortunate to observe in detail,” Thomas said. “That is still important, but we can apply more powerful tools to a much larger, more homogenous data set like the few thousand observations obtained by the Nearby Supernova Factory.” With an interest in spectroscopy, Thomas will focus on developing computer models of radiation and its interaction with matter as the Alvarez Fellow.

“At the end of the day, we want to find the correlations between certain spectroscopic features and shapes and how they correlate with the brightness of a supernova,” Thomas said. “Then you can have an independent means of measuring how bright it is and use it as a cosmic distance indicator.”

When Thomas isn’t working on unraveling the mystery of the universe, he can be found hanging out at museums with his wife, Dianna LaFerry, who graduated with an art degree from the University of Oklahoma and owns a business designing sewing patterns and digital illustrations.