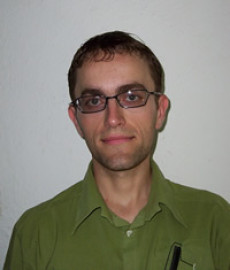 Aleksandar Donev's interest in scientific computing sparked in high school after a science competition challenged him to write a molecular dynamics code. He's been hooked ever since. Now he joins the Berkeley Lab Computing Sciences as a prestigious 2009 Luis W. Alvarez Postdoctoral Fellow.

As an Alvarez fellow, Donev will spend the next year designing, implementing and applying algorithms for modeling fluctuating hydrodynamics with the CRD's Center for Computational Sciences and Engineering (CSEE), which is headed by John Bell.

Originally from The Republic of Macedonia, Donev came to the United States for his undergraduate education at Michigan State University (MSU).

"I specifically became interested in HPC when I was a sophomore, after I joined the heavily computational research group of Dr. Phil Duxbury and became a teaching assistant for a computational physics course sequence," says Donev.

After earning an undergraduate degree in physics from MSU, he migrated east to attend graduate school at Princeton University where he eventually earned a doctorate in Applied and Computational Mathematics. Since then, he has spent three years as a Lawrence Fellow in Lawrence Livermore National Laboratory's Chemistry and Materials Science Directorate and served as a member of both the International and U.S. committees for the Fortran programming language.

"While at LLNL, I collaborated extensively with John Bell and really enjoyed the research and the atmosphere at Berkeley Lab. This experience is what convinced me to apply for the Alvarez fellowship," says Donev, who likes to spend his weekends hiking, camping and traveling around Northern California with his partner and friends.

He also enjoys ballroom and Balkan dancing, jogging, biking, yoga and cooking. Upon completing the Alvarez Fellowship in August of 2010, Donev will move to New York City to begin a tenure track position at the New York University's Courant Institute of Mathematical Sciences.