The Admiral Grace Hopper Fellowship was established in 2015 with the goal of developing young computational scientists to make outstanding contributions in the area of HPC applications.

Upcoming or recent Ph.D. graduates in computational science disciplines, computer science or applied mathematics who have received their degree within the last three years are encouraged to apply. The successful applicant will work in a stimulating environment, can present results at major conference venues and establish strong connections to academic and industry partners. They will receive a competitive salary, relocation assistance, excellent benefits, frequent opportunities to travel, and an opportunity to work in the San Francisco Bay Area. The Hopper Fellowship is awarded for two years, with the possibility of renewal for a third year. 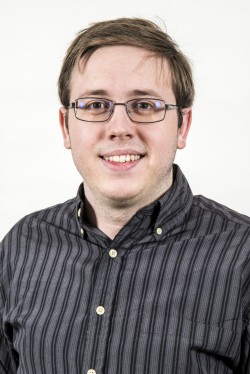 In 2015, Taylor Barnes became the first recipient of the Grace Hopper Fellowship. He was responsible for enhancing the performance of materials science calculations on NERSC's Cori supercomputer, which was at that time the fifth most powerful supercomputer in the world. Specifically, he worked under the direction of Jack Deslippe to improve the parallelization of hybrid density functional theory (DFT) calculations in the popular open-source software package Quantum ESPRESSO. These efforts enabled him to decrease the time-to-solution for accurate simulations of condensed-phase systems by an order of magnitude. In collaboration with the research group of David Prendergast at the Molecular Foundry at Berkeley Lab, he used these computational advances to contribute to the development of rechargeable magnesium-ion batteries, which offer much greater volumetric energy densities than lithium-ion batteries, but which are currently commercially impractical due to the slow rate at which the magnesium ions travel through the cathode of the battery. After an extensive computational investigation of the pathways followed by magnesium ions through the cathode, he was able to identify specific pathways that are responsible for slowing the migration of the ions, thus providing crucial insight towards overcoming the barriers to the development of viable magnesium-ion batteries. Following his fellowship at NERSC, Taylor joined the Molecular Sciences Software Institute as a software scientist. 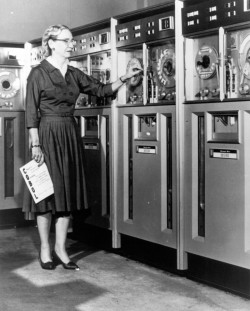 Grace Hopper poses with the ENIAC, the first commercial computer that she was instrumental in bringing to market. She's holding a COBOL manual

Grace Hopper was a pioneer in the fields of software development and programming languages.

A mathematician by training, she was a programmer of the Mark I, the first digital computer built in the United States. She also played an instrumental role in bringing to market the first commercial computer, the ENIAC.

She was a champion for increasing the usability of computers, understanding that their power and reach would be limited unless they were made to be more user-friendly. Hopper wrote the first natural language compiler, co-wrote the COBOL programming language, and served as a U.S. Navy officer, retiring at the rank of rear admiral at age 79.

NERSC's sixth flagship supercomputer was named "Hopper" in her honor.

Researchers in computer science, mathematics, or any computational science discipline who have received a Ph.D. within the last three years are encouraged to apply. Applicants should have expertise with advanced algorithms, software techniques, HPC systems, and/or networking in a related research field. We expect prospective fellows to have demonstrated creativity and the ability to perform independent research. We are also looking for excellence in a related research field, including a solid publications record, high citations, and awards.

Alvarez and Hopper fellowship applications are made jointly via a single process.

In addition to a standard job application, prospective fellows can expect also to submit the following:

Letters of reference must be submitted directly to Berkeley Lab by their writers. The deadline for letters usually follows the close of applications by a week.