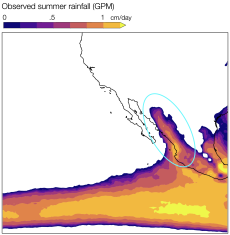 The North American Monsoon pattern can cause heavy rainfall in Mexico and the American Southwest in the late summer. New research using a more granular model shows that this monsoon is mechanically, rather than thermally, forced.

On average, western Mexico and the American Southwest receive half their rainfall for the year between July and September. The deluge is due to the weather pattern known as a monsoon – but according to a new paper by University of California, Berkeley atmospheric scientist William Boos and his team, new analyses and high-resolution models show that this monsoon is like none other on Earth.

Most monsoons – continent-sized patterns characterized by wind and heavy rains, typical around the world in the warmer months – are caused by differences in heating rates. The hot summer sun causes the atmosphere over land to become warmer than the atmosphere over the ocean. When the warmer air rises, it pulls in cooler, wetter air from over the ocean and causes intense rainstorms. These monsoons are “thermally forced” monsoons.

However, new research shows that the North American monsoon, which can reach as far north as Colorado and Northern California, forms primarily through mechanical means –  not thermal ones. Simulating the North American monsoon using resources at the National Energy Research Scientific Computing Center (NERSC) at Lawrence Berkeley National Laboratory (Berkeley Lab), Boos and his team found that this monsoon forms when air from the jet stream is forced toward the equator and then farther up into the atmosphere by the Sierra Madre mountains, where it cools until water vapor condenses and falls to Earth as rain. It’s the only monsoon on Earth known to form in this way.

This distinction came to light during a U.S. Department of Energy study of mountains in North America and their effects on weather patterns – new high-resolution models captured the effects of mountains too small to be captured well in previous models with lower resolution, revealing previously unseen dynamics.

“The mountains over North America are actually pretty tiny, and I don’t mean they’re short,” said Boos. “When you look at the mountains over western Mexico, they’re very narrow compared to, say, the Tibetan plateau or the Rockies. And if you’re using a global computer model, you can have a pretty low-resolution model and still have a pretty good Tibetan plateau. But to get these North American mountains, a lot of them are pretty fine-scale, so you need a very high-resolution model to represent these mountains well.” 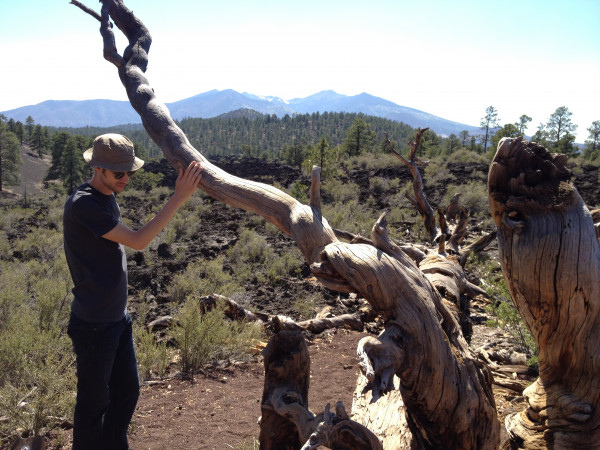 This level of detail is where high-performance computing comes in. Using resources at NERSC, Boos and his team ran multiple high-resolution simulations, each exploring a different set of variables over ten years of simulated time – far longer than would have been possible elsewhere. The computation took nearly five million compute hours to complete.

“For this particular project, high-performance computing at NERSC allowed us to run multiple simulations with a very high-resolution model for enough years,” said Boos. “You can simulate Earth's atmosphere for, say, two months at very high resolution on many computers, but we needed to do multiple simulations for ten years each. We needed to do one control simulation with mountains, another without mountains, and we did a third simulation to test whether the thermal forcing of the land surface is important, where we basically cranked up and cranked down the heating of continental North American by the sun. And we needed to do each of these three different simulations — a control and two experiments, if you will – or ten years of simulated time.”

In addition to computing power at NERSC, Boos and his team used the NERSC-hosted Jupyter interface to collaborate: “The shared Jupyter interface has given a big boost to data analysis in our group, allowing access to large datasets and powerful Python code through a web browser,” he said. “It’s really helped with teaching big data analysis to students and transfer of workflows between collaborators.”

Supported by these computational models in addition to simpler, more idealized theoretical models, this new understanding of how the North American monsoon forms has important implications for short-term weather and long-term climate projections in the area – especially as Earth’s climate warms. The North American monsoon is a key water source for western Mexico and the American Southwest. However, its northern reaches can also cause lightning strikes in places like California, increasing the likelihood of wildfire there. Predictions suggest that the jet stream may shift as Earth warms. New models that show how geographical obstacles redirect that air may offer a better understanding of how water will be distributed and where extreme weather may occur in the future.

“There’s been this prevailing view that the North American monsoon may change, that things may get drier or wetter because the thermal contrast between the land and the ocean is changing,” said Boos. “But we’re saying no, what matters is actually the jet stream getting deflected by the mountains. And there’s some evidence that the jet stream overall is actually going to shift its latitude with global warming, and so it really changes what we should look at if we’re trying to evaluate how the water in that region will change in the future.”

Some of that work will come from Boos and his team as they run more high-resolution models, taking into account future variables like more carbon dioxide in the air and the shifting jet stream, in addition to variable-resolution models that focus on North American weather patterns while broadly taking into account patterns from around the globe. As those models take shape, they can offer more insights into local and regional weather in the area.

“I think we can be helpful in the sense that we're saying, 'if you want to predict weather and extreme rainfall over the North American monsoon region, with some relevance for lightning, you shouldn’t worry so much about your numerical weather prediction model getting the land surface conditions exactly right,’ ” said Boos. “You should be more concerned about representing the jet stream and how the jet stream is deflected by the mountains, correctly.”