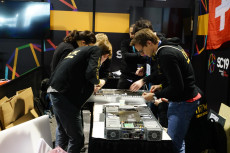 A team works on their project during the Student Cluster Competition at SC19, the last time the competition took place in person. (Credit: studentclustercompetition.us)

At this year’s International Conference for High Performance Computing, Networking, Storage, and Analysis (SC22) in Dallas, TX, teams of high school and undergraduate students will forgo rest, block out their everyday lives, and push through to compete in the field of high performance computing (HPC). And NERSC HPC Consultant Steve Leak will be there the whole time, overseeing them as the chair of the SC22 Student Cluster Competition.

The Student Cluster competition debuted at Supercomputing 2007 and offers undergraduate and high school students from around the world an immersive experience in HPC: student teams design and build small clusters and, over the course of 48 hours straight, complete real-world scientific workloads in the presence of dedicated judges and the Supercomputing conference at large. Among the tasks is the Reproducibility Challenge, in which teams attempt to reproduce results from a paper from the previous year’s conference technical program.

Leak’s involvement with the Student Cluster Competition began in 2018, when he advised a team from Oakland’s Laney College. He says of that time, “it was a really enjoyable experience seeing a group of students discover something new and pick it up and run with it. There’s a really steep learning curve; in the case of the students I was advising, they were new even to Linux. So there were just a lot of things around getting up and running on a cluster. But it was really good to see the team pick this stuff up and run with it, and run with it in their own direction.” Multiple members of that 2018 team went on to study or work in the field of HPC, including at Berkeley Lab.

After serving on the competition’s organizing committee in the intervening years, Leak says his favorite thing about it is the broad connections formed between people and the ways in which those connections improve HPC for coming generations.

“There are all these interactions between all of these people who are fundamentally working toward the same goal, which is to improve things for the field as a whole by improving things for the people coming into it and making it more accessible,” he said. “That’s the biggest thing.”

For example, the competition includes a number of physical constraints, such as a limit on the amount of electrical power teams are allowed to use. This year’s teams will contend with a dynamic power limit that changes during different segments of the competition, a limitation that will be easy for organizers to implement in person, but more difficult to enforce remotely. To adapt, while still ensuring a competition that’s fair and fun for competitors, the remote teams will use a slightly different set of constraints.

Leak notes that, while the Student Cluster Competition is an expanding experience for competitors, it also has much to offer the volunteers who make it happen—in addition to the fun of advising a student team, it can be an opportunity for members of the HPC community to make connections, gain and offer expertise, and distinguish themselves in the field.

“There’s a whole lot there,” said Leak, “and what that means is that there are a whole lot of opportunities to either contribute expertise or develop expertise in HPC. Every year we’re looking for more and new people to get involved and bring a new perspective. I would tout it as a good opportunity to meet and work with some really good people, learn from others and contribute to HPC, and make yourself more visible in the HPC community, as well.”

The 2022 competition is fully staffed, but Leak notes that the committee is always looking for new members and volunteers to help out; interested parties for next year can connect with the competition organizers through this webform. Attendees of the Supercomputing 2022 conference can also stop by to observe the competition in person, particularly a poster session and a series of lightning talks, both on Tuesday in the Student Cluster Competition area toward the back of Hall F.