SRP Program Benefits UTEP Researchers in Materials Science and Beyond

Two summers participating in the Sustainable Research Pathways (SRP) program – a partnership between the Sustainable Horizons Institute and Lawrence Berkeley National Laboratory (Berkeley Lab) – produced academic “compound interest” for Jorge Muñoz, an assistant professor of physics at The University of Texas at El Paso (UTEP), and his undergraduate research team. 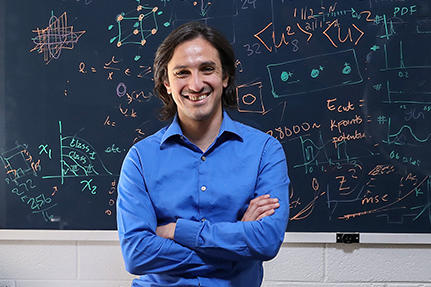 Muñoz and his students spent the summers of 2020 and 2021 working virtually (due to Covid restrictions) with Berkeley Lab scientist and mentor Bert de Jong, who leads the Lab’s Applied Computing for Scientific Discovery Group, utilizing the unique machine learning capabilities of Berkeley Lab and the National Energy Research Scientific Computing Center (NERSC) at Berkeley Lab. Muñoz’s UTEP research group uses computer simulations and develops machine learning algorithms to investigate the microscopic details of how atoms in materials vibrate. These vibrations influence whether particular arrangements of atoms are possible or not at given conditions of pressure and temperature.

While working with Berkeley Lab, Muñoz and his team researched machine learning methods to reduce the computational cost of density functional theory-based molecular dynamics simulations to enable the prediction of thermodynamic quantities of materials from quantum mechanics. The team worked under de Jong’s mentorship to develop mathematical methods to reduce the amount of computation necessary to simulate certain systems from quantum mechanics to understand their thermodynamics by leveraging machine learning. The code they developed reduced computation, and they are planning to make it accessible to more researchers, which could accelerate the discovery of new materials.

“It’s not just what you get out of your research,” said Muñoz. “When you develop code like this, it helps not only you but other researchers.”

The SRP program’s mission is to connect scientists from underrepresented groups (minorities, women, people with disabilities, first-generation scholars, and smaller colleges and universities) with staff scientists to encourage the formation of research collaborations. Berkeley Lab hosts a new contingent of students each summer through the SRP program.

“Opportunities like this — being a part of the SRP program, meeting Bert [de Jong] — change the course of your career in a nonlinear way,” said Muñoz. “The impact that Bert has had on my career and the careers of my students cannot be overstated: from supporting us financially and allowing us to join his group, to introducing us to cutting-edge research and outstanding researchers, to debugging code with us and mentoring me on how to reply to referees.” 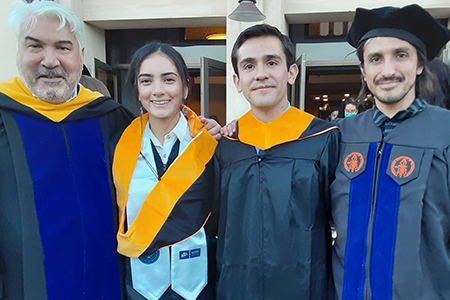 “It can be hard to find money for research projects with my students as a young faculty member,” he added. “So it was also the financial aspect that made such a huge difference, and having the ‘seal’ of Berkeley Lab, so I was able to keep the best students in my group — students who otherwise might have gone elsewhere for summer research opportunities.”

Muñoz’s participation in SRP and his continuing relationship with de Jong have impacted his career in other ways as well. He was named a 2022 Cottrell Scholar by the Research Corporation for Science Advancement (RCSA), and the $100,000 award will support research on the possible existence of shape-memory alloys at high pressure, materials that can be reshaped when cold but return to their original shape when heated. The proposal Muñoz submitted for the RCSA award stemmed directly from his work with de Jong in the SRP program and the code that he and his student team developed then.

Muñoz also recently received a $250,000 two-year NSF grant for a research project focused on investigating the effect of magnetism in his group’s materials research. “Many of the ideas behind this proposal also originate with our work with Bert and other Berkeley Lab collaborators,” said Muñoz. Many students from the SRP summer program are still involved with Muñoz’s research and these grants, while others who participated in SRP have moved on to advanced degree programs at top institutions, some inspired distinctly by their work at Berkeley Lab.

“With our NSF grant, we’ll be researching iron, which is the most common material that makes up our earth in terms of its mass,” said Muñoz. “In a greater scientific sense, if you care about knowing about the structure of the earth, being able to relate the crystal structure and mechanical properties of iron to seismic data allows you to better understand what’s going on inside of our planet.”

In a larger sense, Muñoz said what interested him most about the path his academic research is taking is the geophysics/geoscience aspect of it — learning more about the materials that make up the structure of our planet and other Earth-like planets. The materials application aspect of the research is also a motivator. "Steel and iron are the basis of our modern civilization, so on the engineering side of things there’s a lot of potential for designing new materials for construction and manufacturing,” he said.

‘We are all born scientists’ 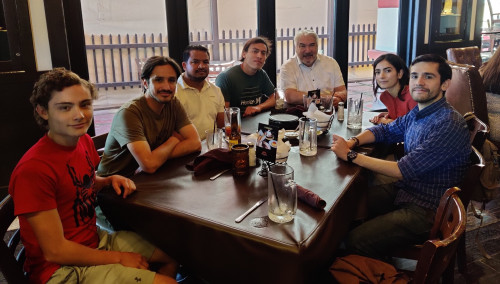 Members of Muñoz's group who are working on computational thermodynamics: (left to right) Adrian De la Rocha, Prof. Muñoz, Bimal K C, Christopher Ibarra, Prof. Ramon Ravelo, Valeria Arteaga, and Homero Reyes. Ravelo is a close collaborator from the Physics Department at UTEP and co-advisor to several of the students. Arteaga recently successfully defended her Master's thesis and will start her Ph.D. in the fall at Ohio State University. Image: Jorge Muñoz, UTEP

Like many of his students at UTEP, Muñoz is a first-generation college graduate. Born in Texas and raised in Juarez, Mexico, Muñoz said his family was supportive of his education but didn’t want him to go into science because they thought it wasn’t a viable way to earn a living.

“I didn’t think I’d even be going to college, but I got an invitation to apply for a scholarship after I took the SAT and just put down physics as my major without really thinking about it,” he said. “I ended up getting the Gates Millennium scholarship and it paid for my entire education, undergrad and graduate, and I never changed my undergrad major.”

Muñoz earned undergraduate degrees in Physics and Applied Mathematics from UTEP in 2007. He was awarded his Ph.D. in Materials Science from the California Institute of Technology (Caltech) in 2013 and went on to work at Intel Corporation before joining the UTEP faculty in 2018.

“I tell my students we are all born scientists,” said Muñoz. “I really believe that, and I think that a lot of students aren’t given opportunities to see what a career in science really looks like. But programs like SRP can really open up those possibilities for young scientists.”