At Solar System's Edge, There be...Bubbles?

NASA's Voyager probes have reached the end of our solar system where they've found neither giants nor dragons, but something nearly as surprising—a turbulent froth of magnetic bubbles.

Using new computer models to analyze Voyager data, scientists computing at the National Energy Research Scientific Computing Center (NERSC) at the U.S. Department of Energy's Lawrence Berkeley National Laboratory have found that the sun's distant magnetic field is made up of bubbles about 100 million miles wide.

The bubbles are created when magnetic field lines reorganize, a process known as magnetic reconnection. This new model suggests the bubbles are self-contained structures disconnected from the solar magnetic field and may help scientists explain how some very strong cosmic rays make it to Earth.

The findings are described in the June 9 edition of the Astrophysical Journal.

Like Earth, our sun has a magnetic field with a north pole and a south pole. The field lines are stretched outward by the solar wind or by streams of charged particles emanating from the sun. The Voyager spacecraft, nearly 10 billion miles away from Earth, are traveling in a boundary region. In that area, the solar wind and magnetic field are affected by material expelled from other stars in our corner of the Milky Way galaxy. 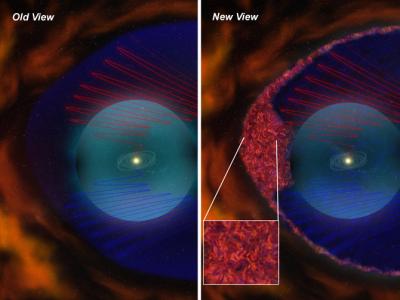 Data sent from the Voyager spacecraft as they exit our solar system is informing new computer models that are changing scientists' view the sun's magnetic field. Once thought to be smooth where it termates (the heliopause), the new models show instead a turbulent region of magnetic bubbles. (Credit: NASA/Goddard Space Flight Center)

"The sun's magnetic field extends all the way to the edge of the solar system," explains astronomer Merav Opher of Boston University. "Because the sun spins, its magnetic field becomes twisted and wrinkled, a bit like a ballerina's skirt. Far, far away from the sun, where the Voyagers are now, the folds of the skirt bunch up."

When a magnetic field gets severely folded like this, interesting things can happen. Lines of magnetic force criss-cross and reconnect. (Such "magnetic reconnection" is the same energetic process that drives solar flares and aurora among other astrophysical phenomena.) The crowded folds of the skirt reorganize themselves, sometimes explosively, into foamy magnetic bubbles.

Voyager 1 entered the "foam-zone" around 2007, and Voyager 2 followed about a year later. At first researchers didn't understand what the Voyagers were sensing, but now they have a good idea.

"We came up with a theory about how reconnection might be behind the data the Voyagers were returning," says James F. Drake, a University of Maryland physicist and one of the team. The team proposed that magnetic reconnection was the source not only of the odd Voyager data, but of strong cosmic rays once thought to originate from the "bow shock," the point where the solar wind slows ubruptly. That idea was discarded after the first Voyager didn't find the high-energy particles expected as it passed through this area.

Using Franklin, a NERSC Cray XT4 supercomputer, Drake created detailed computer models based on magnetic reconnection. "Lo and behold, the predictions our models are making match pretty well with what the Voyagers have seen," says Drake. Recent data from Voyager 2 has strengthened the scientists' confidence, as the probe is encountering high-energy particles inside the magnetic bubbles and none between them. "The idea is that each magnetic bubble acts like a bucket holding these energetic particles," Drake says. "With observation, and then a theoretical idea backed by simulations carried out at NERSC, and then reconfirmation by observation, I think we've really convinced people that we may have been right about this," says Drake. 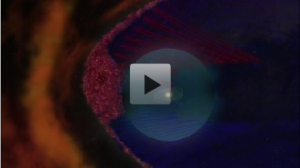 Using a computer model based on Voyager data, scientists have shown that the sun's magnetic field becomes bubbly in the heliosheath due to reconnection. (Credit: NASA/Goddard Space Flight Center)

Theories dating back to the 1950s had predicted a very different scenario: The distant magnetic field of the sun was supposed to curve around in relatively graceful arcs, eventually folding back to rejoin the sun. The actual bubbles appear to be self-contained and substantially disconnected from the broader solar magnetic field.

Energetic particle sensor readings suggest that the Voyagers are occasionally dipping in and out of the foam—so there might be regions where the old ideas still hold. But there is no question that old models alone cannot explain what the Voyagers have found.

Understanding the structure of the sun's magnetic field will allow scientists to understand how our star interacts with the rest of the galaxy.

Launched in 1977, the Voyager twin spacecraft have been on a 33-year journey. They are en route to reach the edge of interstellar space. NASA's Jet Propulsion Laboratory in Pasadena, Calif., built the spacecraft and continues to operate them. The Voyager missions are a part of the Heliophysics System Observatory, sponsored by the Heliophysics Division of NASA's Science Mission Directorate in Washington.

This story was adapted from a NASA release.