Berkeley Lab's Luis W. Alvarez Fellowship in Computing Sciences offers upcoming or recent Ph.D.'s the opportunity to work on some of the most important research challenges in computing sciences at a national lab synonymous with scientific excellence. Since its founding in 2002, the fellowship has cultivated exceptional young scientists who have gone on to make outstanding contributions to computational and computing sciences as researchers, professors, and in the private sector. The Alvarez Seminar Series brings these current and previous Alvarez Fellows together for a chance to share their research and career paths with time for networking. I will first highlight some of the emerging use cases of sparse matrices in data analysis and machine learning. These include graph computations, graph representation learning, and computational biology. The rest of my talk will focus on new parallel algorithms for such modern computations on sparse matrices. These include the use of “masking” for filtering out undesired output entries in sparse-times-sparse and dense-times-dense matrix multiplication, new distributed-memory algorithms for sparse matrix times tall-skinny dense matrix multiplication, combinations of these algorithms, and subroutines of them.

Bio: Aydın Buluç is a Staff Scientist at the Berkeley Lab and an Adjunct Assistant Professor of EECS at UC Berkeley. His research interests include parallel computing, combinatorial scientific computing, high performance graph analysis and machine learning, sparse matrix computations, and computational biology. Previously, he was a Luis W. Alvarez postdoctoral fellow at LBNL during 2010-2012 and a visiting scientist at the Simons Institute for the Theory of Computing. He received his PhD in Computer Science from the University of California, Santa Barbara in 2010 and his BS in Computer Science and Engineering from Sabanci University, Turkey in 2005. Dr. Buluç is a recipient of the DOE Early Career Award in 2013 and the IEEE TCSC Award for Excellence for Early Career Researchers in 2015. He was a founding associate editor of the ACM Transactions on Parallel Computing. Bio: Matthew Zahr is an assistant professor in Notre Dame’s Aerospace and Mechanical Engineering Department. He received his Ph.D. in Computational and Mathematical Engineering from Stanford University in 2016. From 2016-to 2018, he was the Luis W. Alvarez Postdoctoral Fellow in the Department of Mathematics at Berkeley Lab. His research interests include high-order methods for computational physics, PDE-constrained optimization, model reduction, computational methods for resolving shocks and discontinuities, and multiscale methods. 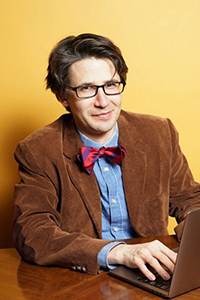 Abstract: High performance computing is crucial in many applications important to the Department of Energy for simulating complex physical phenomena, including climate sciences, high energy physics, and combustion research. These simulations usually contain parameters that determine how well the simulation represents reality. Optimizing these parameters is a computationally expensive task as it may take several minutes to hours to run the simulations with a given parameter set. Efficient optimization algorithms that do not rely on derivative information of the simulation objective function are needed. In this talk, I will present an overview of surrogate model algorithms that use active learning strategies to tackle these types of black-box expensive optimization problems. I will discuss the importance of taking different problem characteristics into account when modeling the optimization problem and developing the algorithms. Abstract: I will take you on a guided tour where we combine physics modeling with high performance computing and numerical mathematics. We will discover how to reduce nuclear waste, search for sterile neutrinos, and develop highly parallel open source software within a multinational team. Towards the end of our journey I will share ongoing works regarding surrogate and inverse models using deep learning techniques and Exascale computing.

Bio: Andreas Adelmann is a senior scientist and head of the interdisciplinary Laboratory for Scientific Computing and Modeling with close to 30 scientists at the Paul Scherrer Institut in Switzerland. At ETH, he teaches courses in accelerator modeling, computational physics and leads a seminar on computational physics. Dr. Adelmann obtained a Ph.D. in applied mathematics from the ETH Zurich on the subject of numerical modeling of high-power cyclotrons. His research interests include advanced accelerator concepts, non-linear dynamics, large-scale optimization, and machine learning. In 2001, Dr. Adelmann was the first recipient of the Alvarez fellowship in computational science awarded by the Lawrence Berkeley Laboratory. In 2012, together with researchers from ETH Zurich and IBM Research Zurich, he received the PRACE award, recognizing a breakthrough in science achieved with high-performance computing resources in the area of reduced-order modeling and optimization.

The Power of Data and Experimental Advantages in Quantum Machine Learning Abstract: Quantum technology has the potential to revolutionize how we acquire and process experimental data to learn about the physical world. An experimental setup that transduces data from a physical system to a stable quantum memory, and processes that data using a quantum computer, could have significant advantages over conventional experiments in which the physical system is measured and the outcomes are processed using a classical computer. We prove that, in various tasks, quantum machines can learn from exponentially fewer experiments than those required in conventional experiments. The exponential advantage holds in predicting properties of physical systems, performing quantum principal component analysis on noisy states, and learning approximate models of physical dynamics. In some tasks, the quantum processing needed to achieve the exponential advantage can be modest; for example, one can simultaneously learn about many noncommuting observables by processing only two copies of the system. Conducting experiments with up to 40 superconducting qubits and 1300 quantum gates, we demonstrate that a substantial quantum advantage can be realized using today's relatively noisy quantum processors. Our results highlight how quantum technology can enable powerful new strategies to learn about nature.

Bio: Jarrod McClean completed his undergraduate degree in chemistry at UC Berkeley in 2006, where he studied quantum Monte Carlo for electronic structure with Professor William Lester. He earned his graduate degree in chemical physics from Harvard University, where he worked with Professor Alan Aspuru-Guzik on a combination of electronic structure and quantum computing. From 2015 to 2017, he was the Berkeley Lab Alvarez fellow working primarily on quantum computing for quantum chemistry, with a strong interest in information sparsity. After his fellowship, McClean joined the Google Quantum AI group, where he’s been ever since. His current work focuses on a combination of quantum computing, machine learning, error reduction, and simulation of physical systems. McClean can be found windsurfing or pickling in the woods just outside Hood River, OR in his free time. Abstract: I will share some of the progress that has been made at the intersection of quantum computing and condensed matter physics. I’ll briefly tell you what both of those things are and explain why they make for good partners as we try to understand the properties of quantum systems. Our recent work has focused on how to make today’s quantum computers useful for solving problems in condensed matter, which requires some judicious choices of not only method but of problems too. Finally, I will endeavor to convince you that we might actually be able to solve problems on quantum computers sometime in the near future (even without the vaunted error correction).

Bio: Lex Kemper got his graduate degree from the University of Florida, where he worked on the theoretical description of newly discovered Fe-based high-temperature superconductors using a combination of phenomenological and quantum chemistry approaches. He moved to Stanford University for a postdoc, where he shifted focus to work on non-equilibrium quantum matter – condensed matter physics driven out of equilibrium using ultrafast lasers. After two years, he moved across the bay to Berkley Lay where he was an Alvarez Fellow from 2012 to 2015, and where he continued to work on non-equilibrium condensed matter physics. He is now associate professor at North Carolina State University, where his research interests have taken a partial tack into the intersection of quantum computing and condensed matter physics. Abstract: In this talk, I will present two profiling tools that my group developed to measure data locality aspects of an application running on a multicore system. Our tools make use of performance monitoring units in a unique way to lower the overhead of profiling. One of such tools is ComDetective, which monitors inter-thread communication. The second tool is ReuseTracker, which analyzes reuse distance in private and shared caches. We expect that both ComDetective and ReuseTracker pave the way for a new generation of low-overhead profiling tools and they can be used by the end-users to improve data locality aspects of their software.

Bio: Didem Unat is a faculty member at Koç University and director of the Parallel and Multicore Computing Laboratory. She is the first researcher from Turkey to receive ERC funding from the European Research Council in the field of Computer Science for her project BEYONDMOORE for the 2021-26 period. She is currently acting as the project coordinator of the €2.6 million EuroHPC partnered project. She was named “Emerging Woman Leader in Technical Computing” by ACM SigHPC in 2021, the first recipient of this award outside the United States. She is known for her work on programming models, performance tools, and system software for emerging parallel architectures. She received her Ph.D. degree from the University of California San Diego, and later the Luis Alvarez Postdoctoral Fellowship in 2012 from Lawrence Berkeley National Laboratory. She received the Marie Sklodowska-Curie Individual Fellowship from the European Commission in 2015, the BAGEP Award from the Turkish Academy of Sciences in 2019, and the British Royal-Newton Advanced Fellowship in 2020.

A Tale of Scientific Workflows Abstract: Scientific workflows developed as a construct to manage the computation and data over a distributed set of resources. More recently, the volume, veracity, and velocity of data generated by the accelerators, colliders, supercomputers, light sources and neutron sources at DOE Office of Science user facilities have grown exponentially in the last few years. It is necessary that we develop appropriate capabilities and tools to understand, analyze, preserve, share, and make optimal use of data. Intertwined with data are complex human processes, policies and decisions that need to be accounted for when building software tools. In this talk, I will cover the evolution of scientific workflows and our research over the past 20 years.  I will discuss our dual approach that combines computer science techniques with user research that focuses on understanding user behaviors, needs, and motivations to build next generation software ecosystems around user and HPC facilities.

Bio: Lavanya Ramakrishnan is a Senior Scientist and Division Deputy in the Scientific Data Division at Lawrence Berkeley National Lab. She started at the Lab in 2009 as an Alvarez fellow and has also served a group lead for the Usable Software Systems group. Her research interests are in building software tools for computational and data-intensive science with a focus on workflow, resource and data management. More recently, she has been using user research methods to understand as well as verify/validate the context of use and social challenges that often impact tool design and development. She currently leads a number of project teams that consist of a mix of social scientists, software engineers, and computer scientists.