Berkeley Lab Reaches Out to Women in Computing

On November 7, approximately 35 students from Mills College in Oakland, Calif. visited NERSC to learn about parallel computing. Katie Antypas, who heads NERSC’s User Services Group, gave a brief talk about the concept of parallel computing and then led the students on a tour of the center’s supercomputers.

Although women comprise the majority of the United States labor force, 60 percent of college graduates in developed countries, most of the of Internet users, and start the majority of new companies created each year in the US, they have made surprisingly few inroads into high performance computing, according to a recent HPC Wire editorial. Berkeley Lab is working to increase the number of women in computer science and HPC applying to work at the Lab.

This month, Berkeley Lab Computing Sciences staff reached out to this group at the Grace Hopper Celebration in Portland, Ore. Back in California, Katie Antypas, who heads NERSC's User Services Group, gave students from Mills College, historically a college for women, a lesson in parallel computing and a tour of the facility's supercomputers. This group also included a co-ed contingent from Mills College's graduate program.

Mills College Students Get a Lesson in Parallel Computing

On November 7, approximately 35 students from Mills College in Oakland, Calif. visited NERSC to learn about parallel computing. Katie Antypas, who heads NERSC’s User Services Group, gave a brief talk about the concept of parallel computing and then led the students on a tour of the center’s supercomputers.

Jeff Todd and Elizabeth Bautista talk to students about job and internship opportunties at Berkeley Lab.

During the week of November 9, thousands of women gathered in Portland, Ore., for the Grace Hopper Celebration—the world's largest technical conference for women and computing. Among the attendees were 10 staff members from Berkeley Lab Computing Sciences who organized and participated in panels, mentoring sessions and a career fair. Berkeley Lab was also a bronze-level sponsor of the conference. 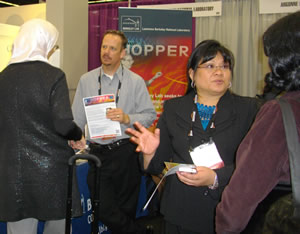 Jeff Todd and Elizabeth Bautista talk to students about job and internship opportunties at Berkeley Lab.

"I am still very early in my career, so I had lot of questions about moving forward. This conference answered some of them," said Sowmya Balasubramanian, a software engineer with the Energy Sciences Network (ESnet)."The sessions on self-confidence, creating your own brand at work, how to give presentations, and the art of negotiating taught me some of the essential skills required at work. The PhD sessions gave me a feel of what is happening currently in the research world. Apart from the sessions, interacting with senior women also helped."

In addition to attending seminars and networking with professionals, Balasubramanian also volunteered for the conference’s Open Source Day, where she set up old laptops for computer labs in areas with limited access to technology.

Meanwhile, Taghrid Samak of the Computational Research Division (CRD) helped organize a student panel discussion titled "The Thin Line: Advising-vs-Supervising." Deb Agarwal of CRD, Deb Heller of ESnet, and Elizabeth Bautista and Alice Koniges of NERSC participated in a number of panels and mentoring sessions hosted by the Committee on the Status of Women in Computing Research (CRA-W). Computing sciences recruiter Jeff Todd was also available to chat with attendees about job opportunities at the Lab throughout the conference and at the career fair.

“This was an energizing conference for your morale. Spending a few days with 3000 technically inspiring and empowering women has to be on every woman's career to-do list. The Hopper Conference is a must,” says Bautista.