NERSC Users Unlock the Secret of a Rechargeable Heat Battery 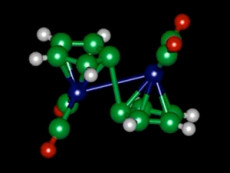 A molecule of fulvalene diruthenium, seen in diagram, changes its configuration when it absorbs heat, and later releases heat when it snaps back to its original shape. Image: Jeffrey Grossman, MIT

Broadly speaking, there have been two approaches to capturing the sun's energy: photovoltaics, which turn the sunlight into electricity, or solar-thermal systems, which concentrate the sun's heat and use it to boil water to turn a turbine, or use the heat directly for hot water or home heating. But there is another approach whose potential was seen decades ago, but which was sidelined because nobody found a way to harness it in a practical and economical way.

This is the thermochemical approach, in which solar energy is captured in the configuration of certain molecules which can then release the energy on demand to produce usable heat. And unlike conventional solar-thermal systems, which require very effective insulation and even then gradually let the heat leak away, the heat-storing chemicals could remain stable for years.

Researchers explored this type of solar thermal fuel in the 1970s, but there were big challenges: Nobody could find a chemical that could reliably and reversibly switch between two states, absorbing sunlight to go into one state and then releasing heat when it reverted to the first state. Such a compound was finally discovered in 1996 by researchers from the University of California at Berkeley and Lawrence Berkeley National Laboratory; but the compound, called fulvalene diruthenium (tetracarbonyl), included ruthenium, a rare and expensive element, so it was impractical for widespread energy storage. Moreover, no one understood how fulvalene diruthenium worked, which hindered efforts to find a cheaper variant.

Recently Peter Vollhardt of UC Berkeley and Berkeley Lab's Chemical Sciences division—the discoverer of the molecule—has begun construction of a working device as proof of principle. However, a basic understanding of what makes this particular molecule special was still missing. In order to tackle this question, Vollhardt teamed up with Jeffrey Grossman of the Massachusetts Institute of Technology (MIT), who did quantum mechanical calculations at NERSC to find out exactly how the molecule accomplishes its energy storage and release.

The calculations at NERSC showed that the fulvalene diruthenium molecule undergoes a structural transformation when it absorbs sunlight, putting the molecule into a higher-energy or charged state where it can remain stable indefinitely. Then, triggered by a small addition of heat or a catalyst, it snaps back to its original shape, releasing heat in the process. But the process is a bit more complicated than that.

"It turns out there's an intermediate step that plays a major role," said Grossman. In this intermediate step, the molecule forms a semistable configuration partway between the two previously known states. "That was unexpected," he said. The two-step process helps explain why the molecule is so stable, why the process is easily reversible, and also why substituting other elements for ruthenium has not worked so far.

In effect, explained Grossman, this discovery makes it possible to produce a "rechargeable heat battery" that can repeatedly store and release heat gathered from sunlight or other sources. In principle, Grossman said, a fuel made from fulvalene diruthenium, when its stored heat is released, "can get as hot as 200 degrees C, plenty hot enough to heat your home, or even to run an engine to produce electricity."

Compared to other approaches to solar energy, he said, "it takes many of the advantages of solar-thermal energy, but stores the heat in the form of a fuel. It’s reversible, and it’s stable over a long term. You can use it where you want, on demand. You could put the fuel in the sun, charge it up, then use the heat, and place the same fuel back in the sun to recharge."

In addition to Grossman, the theoretical work was carried out by Yosuke Kanai of Lawrence Livermore National Laboratory and Varadharajan Srinivasan of MIT, and supported by complementary experiments by Steven Meier and Vollhardt of UC Berkeley. Their report on the work, which was funded in part by the National Science Foundation, by the Sustainable Products and Solutions Program at UC Berkeley, and by an MIT Energy Initiative seed grant, was published on October 20, 2010, in the journal Angewandte Chemie International Edition.

The problem of ruthenium's rarity and cost still remains as "a dealbreaker," Grossman said, but now that the fundamental mechanism of how the molecule works is understood, it should be easier to find other materials that exhibit the same behavior. This molecule "is the wrong material, but it shows it can be done," he said.

The next step, he said, is to use a combination of simulation, chemical intuition, and databases of tens of millions of known molecules to look for other candidates that have structural similarities and might exhibit the same behavior. "It's my firm belief that as we understand what makes this material tick, we'll find that there will be other materials" that will work the same way, Grossman said.

Grossman plans to collaborate with Daniel Nocera, a professor of energy and chemistry at MIT, to tackle such questions, applying the principles learned from this analysis in order to design new, inexpensive materials that exhibit this same reversible process. The tight coupling between computational materials design and experimental synthesis and validation, he said, should further accelerate the discovery of promising new candidate solar thermal fuels.

Soon after the Angewandte Chemie paper was published, Roman Boulatov, assistant professor of chemistry at the University of Illinois at Urbana-Champaign, said of this research that "its greatest accomplishment is to overcome significant challenges in quantum-chemical modeling of the reaction," thus enabling the design of new types of molecules that could be used for energy storage. But he added that other challenges remain: "Two other critical questions would have to be solved by other means, however. One, how easy is it to synthesize the best candidates? Second, what is a possible catalyst to trigger the release of the stored energy?"

Recent work in Vollhardt's laboratory has provided answers to both questions. Vollhardt and other Berkeley Lab experimentalists, including Rachel Segalman and Arun Majumdar (now director of the U.S. Department of Energy’s Advanced Research Projects Agency-Energy, or ARPA-E), have successfully constructed a microscale working device of fulvalene diruthenium and have applied for a U.S. patent. Using both theoretical and experimental results, they are working to maximize the device’s efficiency and demonstrate that thermochemical energy storage is workable in a real system.

About NERSC and Berkeley Lab
The National Energy Research Scientific Computing Center (NERSC) is the primary high-performance computing facility for scientific research sponsored by the U.S. Department of Energy's Office of Science. Berkeley Lab is a U.S. Department of Energy national laboratory located in Berkeley, California. It conducts unclassified scientific research and is managed by the University of California for the DOE Office of Science.