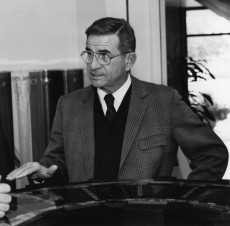 John Killeen, the founding director of what is now known as the National Energy Research Scientific Computing Center (NERSC), died August 15, 2012 at age 87. Killeen led the Center from 1974 until 1990, when he retired. The Department of Energy conferred its highest honor, the Distinguished Associate Award, on Killeen in 1980 in recognition of his outstanding contribution to the magnetic fusion energy program.

Initially known as the Controlled Thermonuclear Research Computer Center when established in 1974 at Lawrence Livermore National Laboratory, the center was renamed the Magnetic Fusion Energy Computer Center in 1976. To reflect its broadened mission support of other science domains, the center was rechristened the National Energy Research Supercomputing Center in 1990.

When the center moved from LLNL to Berkeley Lab in 1996, one of the new Cray J-90 supercomputers was named in honor of the founding director.

Born in 1925 in Guam to a Navy family, he entered the U.S. Naval Academy at Annapolis, Maryland at age 18. Following World War II, he earned a B.A. in physics at the University of California, Berkeley. There, while living at International House, he met his wife of 62 years, Marjorie. He continued his studies at U.C.B. and was awarded a M.A. and Ph.D., both in mathematics.

His long association with the Lawrence Livermore National Lab began in 1957 when he worked on the then-secret U.S. fusion effort called Project Sherwood. In 1958, this controlled thermonuclear reaction research was declassified in time for the Second United Nations International Conference on the Peaceful Uses of Atomic Energy and for which Killeen coauthored a paper, the first of 90 publications throughout his career.

Killeen taught mathematical science at the University of California, Davis and was an original faculty member for the Department of Applied Science, founded in 1963 by Edward Teller. He was later appointed associate dean of the U.C.D. College of Engineering.  As first director of the Plasma Physics Research Institute, he promoted collaborative work in plasma physics between universities and Lawrence Livermore National Laboratory.