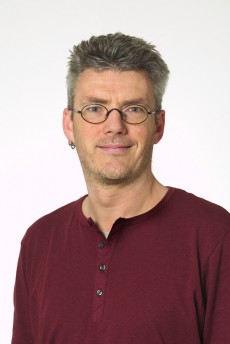 Julian Borrill, co-leader of the Computational Cosmology Center in the Computational Research Division, gave an invited talk at the Numerical Cosmology 2012 conference held July 17-20 in Cambridge, England, and also chaired the session in which the university’s new supercomputer was officially launched.

Professor Stephen Hawking participated in the ceremony inaugurating COSMOS, the most powerful shared-memory supercomputer in Europe. Manufactured by SGI and the first system of its kind, the COSMOS supercomputer is part of the Science and Technology Facilities Council DiRAC High Performance Computing facility, a national service for UK cosmologists, astronomers and particle physicists, as well as non-academic users.

For Borrill, it was something of a homecoming. He began studying mathematics at Trinity College, eventually earning a joint degree in math and political science. His concern for social issues then led him into working in child care and union organizing. While working for a union, he would take in lectures by Hawking over lunch. The lecture series formed the basis for the book, “A Brief History of Time,” which Borrill rates as “great lectures, unreadable book.”

But the lectures did inspire him to return to academia to study science, and eventually cosmology. Borrill went on to earn master’s degrees in astrophysics and IT from Queen Mary College in London and a Ph.D. in theoretical physics from the University of Sussex.

So what happens when you invite the world’s most famous physicist to a virtual ribbon cutting ceremony? “We had much better cakes and cookies at tea that afternoon,” Borrill said.