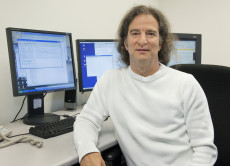 James Sethian, an applied mathematician at Lawrence Berkeley National Laboratory and professor of mathematics at the University of California at Berkeley, was one of 84 new members and 21 foreign associates from 14 countries elected to the National Academy of Sciences in recognition of their distinguished and continuing achievements in original research.

The National Academy of Sciences is a private organization of scientists and engineers dedicated to the furtherance of science and its use for the general welfare. It was established in 1863 by Congress, which can call on the Academy to act as an official adviser to the federal government, upon request, in any matter of science or technology.

At Berkeley Lab, Sethian leads the Mathematics Group in the Computational Research Division. The group develops new mathematical models, devises new algorithms, explores new applications, exports key technologies and trains young scientists in support of the Department of Energy’s research mission. The group uses mathematical tools from areas in mathematics, physics, statistics and computer science, and  focuses on problems that are both technologically interesting and mathematically challenging, and form a set of interrelated computing methodologies and applications in support of the DOE energy mission.

“James’ election to the National Academy is yet another well-deserved recognition of his innovative research and his commitment to developing future generations of mathematicians and scientists,” said Kathy Yelick, Berkeley Lab’s Associate Laboratory Director for Computing Sciences. “What makes the work of his group so compelling is their use of innovative mathematical models to address problems ranging from new energy sources to environmental remediation to seismic imaging.”

Sethian has worked on numerical algorithms for tracking moving interfaces for more than 30 years, starting with his work on curve and surface propagation in combustion in 1982, and his 1985 work on entropy conditions, curvature stability of numerical algorithms. This work led to development of the level set method in 1988, which was developed jointly with Stanley Osher.

His wide-ranging research contributions were recognized in 2011 when he won the 2011 Pioneer Prize from the International Council for Industrial and Applied Mathematics (ICIAM). Sethian was honored "for his fundamental methods and algorithms that have had a large impact in imaging and shape recovery in medicine, geophysics and tomography, and drop dynamics in inkjets."

In 2008, Sethian was elected to the National Academy of Engineering, honored “for the development of efficient methods of tracking moving interfaces.” He is also the recipient the 2004 Norbert Wiener Prize in Applied Mathematics, which is awarded every three years jointly by the American Mathematical Society (AMS) and the Society for Industrial and Applied Mathematics (SIAM), for his work on level set methods and other applications.

Sethian is the author of many scientific articles and books, and serves as an editor on several journals. In 2011, he and Robert Saye, also a member of the Berkeley Lab Mathematics Group with a joint appointment at UC Berkeley, won the 2011 Cozzarelli Prize for the best scientific paper in the category of Engineering and Applied Sciences for "The Voronoi Implicit Interface Method for computing multiphase physics." The Cozzarelli Prize is sponsored by the Proceedings of the National Academy of Science.

Sethian received his Ph.D. in Applied Mathematics at the University of California, Berkeley in 1982, with a dissertation analyzing theoretical and numerical aspects of the numerical approximation of moving curves and surfaces in combustion modeling. He followed with a National Science Foundation postdoctoral fellowship at the Courant Institute of Mathematics, and then returned to UC Berkeley as an Assistant Professor in 1985. He is currently Vice Chair for Undergraduate Affairs and Professor in the Department of Mathematics.