Ceremony Marks the End of First Phase of Construction 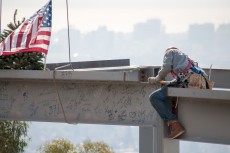 The final steel girder of the Computational Research and Theory facility was hoisted into place today in a “topping off” ceremony.

As tradition dictates, the beam was decorated with an evergreen and an American flag and the beam was signed by both the builders and some of the eventual occupants, including Kathy Yelick, Associate Lab Director for Computing Sciences, and division directors Sudip Dosanjh (NERSC), David Brown (Computational Research), and Greg Bell (Scientific Networking).

Some wags included messages with their signatures. “Computer goes here,” wrote NERSC’s Shane Cannon with an arrow pointing down.  David Skinner, also of NERSC added, “MPI_FINALIZE,” an inside joke for supercomputer programmers.

Topping off—the roots of which are old, but obscure—marks the beginning of the end for the heavy construction phase carried out by the “raising crew.”

When construction is complete in early 2015, the CRT facility will house all three divisions of Berkeley Lab’s Computing Sciences, as well as NERSC’s supercomputers in a state-of-the-art data center.

Construction crew and guests shared a dinner after the ceremony, also a custom of the building rite.

»See more photos from the event.