When Dave Stevens (right), Eric Beals (left) and Bill Benson retired in 1997, they had more than 100 years of combined service at Berkeley Lab.

David F. Stevens, whose lab career spanned 40 years during which he worked for every lab director except Ernest Lawrence, has died. He began his career as a mathematical programmer in Bldg. 46 and was serving as the lab’s liaison to DOE, reviewing directives and formulating responses, when he retired in December 1997. Hired in 1960, Stevens continued working at the lab as a guest scientist until 2000.

Along the way, he had a stint as a computing consultant at CERN, worked with many of the lab’s supercomputers in the 1960s and ‘70s, and headed the computer security program. He also served on several national standards committees.

“Dave Stevens accomplished much at LBNL, guiding our institutional computing through unpredictable changes in technology to serve the lab mission. His effect on the lab was visible and critical during his time at LBNL,” said former Computing Sciences Deputy and IT Division Director Sandy Merola, who worked with Stevens for 18 years.

“On a personal note, Dave Stevens was one of the most principled persons with whom I have ever been associated. He always insisted on the higher ground from both ethical and institutional perspectives. He never allowed professional or personal standards to be lowered due to politics or so-called loyalties. Those in management at LBNL would seek his advice often as we knew his advice would be solid and principle-based. His passing will best be commemorated at LBNL by those who perpetuate such high principles,” Merola adds.

In 2011, Stevens wrote an 11-page memoir of his work in computing at the lab, as well as related trips and adventures. In his plain-speaking way, he described what he saw as one of his main contributions in the early days of scientific computing, when a supercomputer ran on just one processor.

“One of my claims to fame should have been that I developed one of the first, if not, indeed, the first at a major super-computer installation, adaptive/preemptive scheduling algorithms, where preemptive meant that a higher-priority job could push a lower-priority job out of the way, and adaptive meant that the priority of a job changed as its operating characteristics changed. Our goal was to maximize the amount of work we could put through the computer by getting the computer to work on several jobs at once. The design of the machine was such that several jobs could be reading or writing tape, but only one job could use the CPU at any given time, so our scheduler would try to give the CPU to a job that was going to relinquish it quickly to do some reading or writing. We did this by keeping a running average of each job’s average CPU burst length: The job with the shortest burst length got the highest priority; this was accomplished by increasing a job’s priority while it was waiting for the central processor, and decreasing the priority gradually as it continued to hold it. This one effort, which basically doubled the amount of work we could get out of the computer, probably paid the Laboratory several times over for the entire salary it paid me over the years. But that was still several years in the future (1967/8). I should not take the whole credit, however. The basic idea was Jim Baker’s, and the final product was Jerry Knight’s, but I did the first version, which demonstrated that Jim’s ideas were sound.” 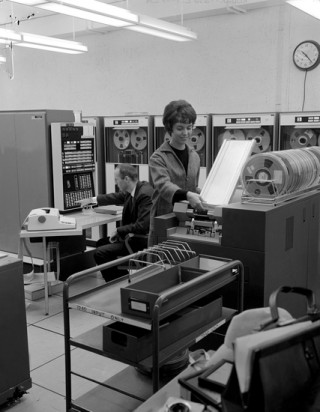 Two new computers will take some of the pressure off Berkeley's giant IBM 7090. In Building 50A's computer center, Dave Stevens and Carol Ann Bruno, both of Math & Comp Services, run a program through the 7040.

As a member of the Math and Computing Group in the Physics Division (back when Berkeley Lab was primarily a physics lab and called the Lawrence Radiation Laboratory), Stevens worked on a wide range of early computers, including the IBM 7040, 709 and 7090, and the speeded up 7044 and 7094. But when IBM introduced the 360, Stevens wrote in his memoir, it was unsuitable for scientific work and pushed the labs to the Control Data Corporation’s 6600 – designed by Seymour Cray.

In an article on his retirement, Stevens said the 6600 was the system he enjoyed working on most. One reason was its much faster processing speed. “We were used to putting in cards and getting the output back two to four hours later. When we were testing the 6600 at the factory, we put in a job and were heading out the door, expecting to come back in an hour, but output was coming out before we reached the door. That was two orders of magnitude faster than what we had.”

That demonstration, which took less time than it took the IBM 360 just to read the cards, was what sold the DOE (then Atomic Energy Commission) labs on CDC machines. Berkeley Lab installed both the 6600 and 7600 models in the 1970s (and helped run jobs when NERSC’s predecessor at Livermore was overtaxed).

Stevens was known for both his wit and his direct observations, some of which still sound familiar.

“One thing you could be pretty sure of at the Lab was that you wouldn’t stay in one office for very long – I can remember at least ten offices, but I may have had more – so it wasn’t long until I was moved to a loft in Building 46, which was primarily an engineering space. The loft was right up under a metal roof, and one summer day when the temperature reached 101° by 9:30 we all just went home. Fortunately, we didn’t have to stay in those accommodations for very long, because the 709 was coming, and to make room for it, they had to build the first two of several new wings onto Building 50, where the Director of the Laboratory and the Physics Division were housed. (By the time I left the Lab, Building 50 had five wings appended to it in various ways.) And the only way they could get the computer – they were very large in those days – into the building was to lower it in by crane before the roof went on.”

In 1979, he wrote a prescient paper on “The Role of the Microcomputer in the Demise of Western Civilization.” In his paper, he said that the then-new technology would one day replace shopping in stores, watching movies in theaters and getting together with friends for conversation and games. The demise of civilization, he predicted, would be through the increasing isolation of the population as they preferred communicating via computer rather than risking face-to-face interactions. And as those meetings become less common, people will forget how to conduct them, he predicted.

“As might be expected, the computer folk will lead the way. The home terminal is the first step of the great shift away from the office and into the home,” he wrote. “As computer-powered toys become ever more seductive there will be ever less reason for unfiltered interpersonal communications.”

In the story on his retirement, Stevens summed up his career by saying, “I’m not the sort of person who had planned his life. I took a job here because I got married and had $25 in the bank. Along the way, the lab has been an interesting ride and provided me with a variety of interesting work. I don’t think of myself as a pioneer in scientific computing, but I did get to work with some of the pioneers.”