Mentoring program brought more than 70 women from 16 Middle Eastern and African countries to the U.S.

For Aseel Honein, an architect, teacher and design activist from Lebanon, spending a month collaborating with scientists at Berkeley Lab was a dream come true.

She got the opportunity to do so through the TechWomen 2013 program, which brought 76 women from 16 Middle Eastern and African countries to the U.S. in October for a five-week professional mentoring program. This is the third year the Lab has been represented in the program; this year’s theme was entrepreneurship.

Launched by former Secretary of State Hillary Rodham Clinton in 2011, TechWomen is an international exchange designed to empower, connect and support women professionals in science, technology, engineering, and mathematics (STEM). Each year TechWomen connects its participants with their professional counterparts in the U.S. and gives them access to networks, resources and industry contacts.

During their stay, the women worked on specific projects at the Lab and visited tech companies across the Bay Area, including Twitter, Facebook and LinkedIn. They also toured a number of scientific facilities, including the Advanced Light Source, NERSC and Xerox PARC, and participated in professional development workshops and networking events.

“The Tech Women program was an amazing October full of eye-opening interactions with emerging STEM leaders from across 16 countries,” said Singh, Program Director, LIGTT (LBNL Institute for Globally Transformative Technologies), who mentored Aboukhodier. “It has also been a personal journey of self-discovery in helping my Egyptian mentee achieve her objectives of expanding her exposure to cleantech R&D and professional practices at Berkeley Lab.”

Aboukhodier has worked for 15 years in the economic development sector, specifically in financial and project management of renewable energy and environmental sectors. She has a master’s degree in Renewable Energy Technology from Cranfield University and is pursuing a master’s in business administration from the Edinburgh Business School. While at the Lab she worked with LIGTT, focusing on ways to bridge the electricity gap in developing Asia and sub-Saharan Africa.

“I was so excited to be hosted by the Lab in the Environmental Energy Technologies Division (EETD),” Aboukhodier said. “When I first found out, I thought ‘Am I dreaming?’” 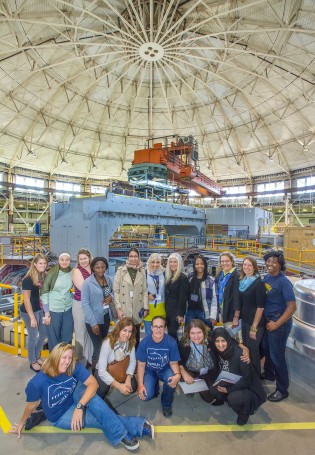 As part of TechWomen 2013, emerging leaders from around the world toured a number of scientific facilities in the Bay Area, including the Advanced Light Source at Berkeley Lab. Photo by Roy Kaltschmidt, LBL

Honein is a practicing architect in Lebanon who teaches architectural courses at the Lebanese American University. She holds a master’s degree in international cooperation and sustainable emergency architecture and founded Mediterranean Interactive Dialogue, a nonprofit organization that addresses socioeconomic and environmental issues via design, planning and technology.

While at the Lab she was mentored by Granderson, a research scientist and the Deputy of Research Programs for the Building Technology and Urban Systems Department. Honein spent much of her time developing an energy management information system for measurement and verification applications.

“I previously thought of energy management as a series of diagrams and energy flow,” she said. “I see it now in a much more elaborate way.”

Ushizima, Deputy Group Leader of Analytics and Visualization at Berkeley Lab, mentored Salma Elaoud, an assistant professor at the Higher Institute of Computer Science and Multimedia in Sfax, Tunisia who has a doctorate in mathematics. Together they worked to ally Elaoud’s strong mathematical background with Ushizima’s expertise in computer vision. As part of this project, Elaoud learned how to use an image processing framework and organized a set of math classes using digital image processing as the motivation to learn linear algebra, noted Ushizima.

“We had a great time, and we turned the BART strike into more hours to discuss our activities by commuting to San Francisco together,” she said.

On November 1, the entire group traveled to Washington, D.C. for a final week of meetings and special events. Once back home, the emerging leaders intend to take what they have learned from their time in the U.S. and apply it to their entrepreneurial and educational efforts.

“It has been very insightful being here,” said Honein, who hopes to expand the design workshops she offers in Lebanon and develop a software tool for design teachers. “It has opened my eyes to new things, especially here in the Bay Area where there are so many startups in technology.”

Aboukhodier is excited about her future in renewable energy, both in her home country and in other developing nations.

“I have a dream to start a company where we could build and offer these technologies to people in remote areas and help them improve their lives,” she said.

Her TechWomen experience is far from over, she added.

“It is hard to say the journey is coming to an end,” she said. “I would rather say that it is just beginning. We can build bridges, always.”