First large‐scale simulation of reactive transport at the pore scale 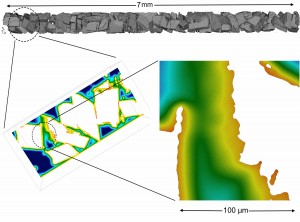 Reactive transport in a capillary tube packed with crushed calcite from experimental image data. Resolution of the simulation grid (top) is 1 micron, as shown in the second slice (bottom) of calculated calcite saturation. Select image to enlarge. (David Trebotich)

Geologic carbon sequestration—trapping carbon dioxide (CO2) from fossil-fuel-burning power plants in underground aquifers—is a key strategy for mitigating global warming. Developing tools and techniques to predict and control the long-term stability of these CO2 reservoirs is the mission of the DOE Energy Frontier Research Center (EFRC) for Nanoscale Control of Geologic CO2 (NCGC), a collaborative effort led by Lawrence Berkeley National Laboratory, and including three other national laboratories and four universities.

As CO2 is pumped underground, it can react chemically with underground minerals and brine in various ways, sometimes resulting in mineral dissolution and precipitation, which can change the porous structure of the aquifer. But predicting these changes is difficult because these processes take place at the pore scale and cannot be calculated using macroscopic models. The dissolution rates of many minerals have been found to be slower in the field than those measured in the laboratory; understanding this discrepancy requires modeling the pore-scale interactions between reaction and transport processes, then scaling them up to reservoir dimensions.

To meet this challenge, the NCGC team combined the SCIDAC‐developed Chombo platform for direct numerical simulation of flow and transport with the complex geochemistry code CrunchFlow. With the integrated Chombo-Crunch code, and using a NERSC NISE allocation on Hopper, they performed the first‐ever large‐scale simulation of reactive transport pore‐scale processes on real‐pore‐space geometry as obtained from experimental data.

Textures affecting flow, transport, and reaction—as might be found in porous rock—were explicitly introduced into the pore-scale model of a capillary tube packed with crushed calcite, with full resolution of all interfaces at the micron scale. This was the largest pore-scale reactive flow simulation ever attempted, involving 1.6 billion grid points, and requiring 8.7 million processor hours on Hopper and up to 138,000 cores. The grid resolution of the model is now very close to that of imaging experiments, enabling a key EFRC goal of combining simulation and experiment.

The new high-resolution model demonstrated that the mineral dissolution rate depends on the pore structure of the aquifer: the average reaction rate depends on the flow pattern within the porous rock and the concentration gradients that develop at the pore scale. Lack of uniformity in the flow field at the pore scale (due to varying rock structures) has the effect of decreasing the overall reactivity of the system, and this effect becomes more pronounced as the variety of rock structures increases and the fluid flow slows down. This result is the first step in explaining the discrepancy between laboratory experiments and field measurements of mineral dissolution rates.

At the Sleipner oil field in the North Sea, a Norwegian company captures carbon dioxide from natural gas production and pumps it hundred of meters under the seafloor. Scientists are creating computer models to help predict how much CO2 can be stashed this way and what will happen as it interacts with the geologic formations it is pumped into.

The integration of microscopic imaging, pore-scale modeling, and carefully controlled experimentation will provide an unprecedented new understanding of how fundamental molecular-scale processes of flow, transport, and reaction play out at the pore scale. New insights into the pore-scale dynamics that merge under the far-from-equilibrium conditions associated with the injection of CO2 will greatly improve researchers’ ability to develop scientifically defensible predictive models of CO2.