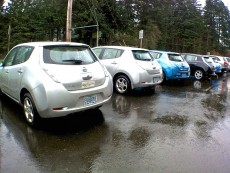 A better battery—one that is cheap and safe, but packs a lot of power—could lead to an electric vehicle that performs better than today’s gasoline-powered cars, and costs about the same or less to consumers.  Such a vehicle would reduce the United States’ reliance on foreign oil and lower energy costs for the average American, so one of the Department of Energy’s (DOE’s) goals is to fund research that will revolutionize the performance of next-generation batteries.

In honor of DOE's supercomputing month, we are highlighting some of the ways researchers are using supercomputers at the National Energy Research Scientific Computing Center (NERSC) are working to achieve this goal.

Lithium-ion batteries are everywhere— in smart phones, laptops, an array of other consumer electronics, and electric vehicles. Good as they are, they could be much better, especially when it comes to lowering the cost and extending the range of electric cars. To do that, batteries need to store a lot more energy.

Using supercomputers at NERSC, Berkeley Lab researchers developed a new kind of anode—energy storing component—that is capable of absorbing eight times the lithium of current designs. The secret is a tailored polymer that conducts electricity and binds closely to lithium storing particles. The researchers achieved this result by running supercomputer calculations of different promising polymers until they found the perfect one. This research is an important step toward developing lithium-ion batteries with eight times their current capacity.

After more than a year of testing and many hundreds of charge-discharge cycles, Berkeley researchers found that their anode maintained its increased energy capacity.  This is a significant improvement from many lithium-ion batteries on the market today, which degrade as they recharge. Best of all, the anodes are made from low-cost materials that are also compatible with standard lithium battery manufacturing technologies.

Using supercomputers at NERSC and powerful microscopes, a team of researchers from the Pacific Northwest National Laboratory (PNNL) and Princeton University built a novel graphene membrane that could produce a lithium-air battery with the highest-energy capacity to date. Because the material does not rely on platinum or other precious metals, its potential cost and environmental impact are significantly less than current technology.

Promise for Onion-Like Carbons as Supercapacitors

The two most important electrical storage technologies on the market today are batteries and capacitors—both have their pluses and minuses. Batteries can store a lot of energy, but have slow charge and discharge rates. While capacitors generally store less energy but have very fast (nearly instant) charge and discharge rates, and last longer than rechargeable batteries. Developing technologies that combine the optimal characteristics of both will require a detailed understanding of how these devices work at the molecular level. That’s where supercomputers come in handy.

One promising electrical storage device is the supercapacitator, which combines the fast charging and discharging rates of conventional capacitators, as well as the high-power density, high-capacitance (ability to store electrical charge), and durability of a battery. Today supercapacitators power electric vehicles, portable electronic equipment and various other devices. Despite their use in the marketplace, researchers believe these energy storage devices could perform much better. One area that they are hoping to improve is the device’s electrode, or a conductor through which electricity enters or leaves.

Most supercapacitor electrodes are made of carbon-based materials, but one promising material yet to be explored is graphene. The strongest material known, graphene also has unique electrical, thermal, mechanical and chemical properties. Using supercomputers at NERSC, scientists ran simulations to understand how the shape of a graphene electrode affects its electrical properties. They hope that one-day this work will inspire the design of supercapacitators that can hold a much more stable electric charge.

A Systematic Approach to Battery Design

New materials are crucial for building advanced batteries, but today the development cycle is too slow. It takes about 15 to 18 years to go from conception to commercialization. To speed up this process, a team of researchers from Lawrence Berkeley National Laboratory (Berkeley Lab) and the Massachusetts Institute of Technology (MIT) created a new computational tool called the Materials Project, which is hosted at NERSC.

The Materials Project uses supercomputers at NERSC, Berkeley Lab and the University of Kentucky to characterize the properties of inorganic compounds—such as stability, voltage, capacity and oxidation state—via computer simulations. The results are then organized into a database with a user-friendly web interface that allows users to easily access and search for the compound that they would like to use in their new material design. Knowing the properties of a compound beforehand allows researchers to quickly assess whether their idea will be successful, without spending money and time developing prototypes and experiments that will eventually lead to a dead-end.

In early 2013, DOE pledged $120 million over five years to establish the Joint Center for Energy Storage Research (JCESR). As part of this initiative, the Berkeley Lab and MIT researchers will run simulations at NERSC to predict the properties of electrolytes—a liquid. The results will be incorporated into a database similar to the Materials Project. Eventually researchers will be able to combine the JCESR database with the Materials Project to get a complete scope of battery components. Together, these resources allow scientists to employ a systematic and predictive approach to battery design.