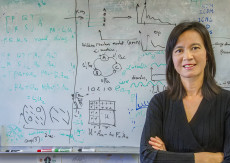 Since its launch in 1999, the SuperLU software library for solving sparse linear systems of equations has become the third most downloaded software at Lawrence Berkeley National Laboratory. Between Oct. 1, 2011 and Sept. 30, 2012, SuperLU was downloaded 24,303 times, nearly a 50 percent increase over the 16,876 downloads the previous year. Over the years, SuperLU has consistently been the most-downloaded software from the Berkeley Lab Computing Sciences organization.

When researchers try to solve science and engineering problems, they often create systems of linear equations that need to be solved. As science and engineering goals become more ambitious, the number of equations keeps growing, requiring large parallel computers for their solution. Software libraries known as solvers have been developed, providing mathematical tools that can be applied to similar problems.

SuperLU is one of the leading software libraries used for systems of linear equations that are sparse, where many of the matrix entries are zero and ideally need neither to be stored nor operated on. The strength of SuperLU is that it can automatically determine which matrix entries are zeros and can be ignored, allowing the computer to focus its calculations on the other entries and solve the problem faster. (The “LU” in SuperLU refers to the lower and upper triangular matrices in LU decomposition, a method introduced by mathematician Alan Turing.)

Xiaoye “Sherry” Li of the Scientific Computing Group in Berkeley Lab’s Computational Research Division (CRD) developed the first version of SuperLU for her Ph.D. thesis at UC Berkeley, working with Jim Demmel of UC Berkeley and CRD, and John Gilbert of UC Santa Barbara. Laura Grigori of INRIA in France, Meiyue Shao of Umea University in Sweden, and Ichitaro Yamazaki of the University of Tennessee have added features to the software. Other members of the Scientific Computing Group have developed other solvers using SuperLU as the main code base.

“I was working with Jim Demmel’s group on dense matrix solvers and looking for a research topic for my thesis when I realized that it might be quite useful to develop a sparse matrix solver to help engineers address problems like simulating the effects of earthquakes on bridges,” Li said. “Using a dense solver on a sparse matrix problem wastes a lot of computing power, and at the time there was very little software for solving sparse matrices on large parallel computers. But I never imagined that SuperLU would have such a large impact.”

One of the first accomplishments using parallel SuperLU was the first solution of an electron-impact ionization problem in quantum mechanics, which led to the cover article of the Dec. 24, 1999 issue of Science magazine. Since it was created, SuperLU has been improved so it can now scale to run in applications using thousands of processors.

SuperLU is supported by the Department of Energy and the library has been used to tackle problems in fusion physics and accelerator physics. By creating detailed simulations on high performance computers, scientists can more accurately design accelerators and fusion reactors, increasing the likelihood that these complicated, expensive devices will work as planned. Among the research applications incorporating SuperLU are NIMROD and M3D-C1 for simulating fusion physics; Omega3P for accelerator design analysis; FEAP, a general purpose finite element analysis program; and OpenSees, an Open System for Earthquake Engineering Simulation.

The study of fusion physics applications is important in discovering how to harness fusion, creating clean energy using nearly inexhaustible hydrogen as the fuel. Scientists at Princeton Plasma Physics Laboratory and Berkeley Lab have used computer modeling for a prototype fusion reactor, ITER, which is now being constructed in France. If successful, ITER will produce 10 times as much energy than it uses — but that success hinges on accurately designing the device.

ITER is based on the tokamak concept, which is a doughnut-shaped vessel filled with a very high temperature gas (plasma) and extremely strong magnetic fields. In order to optimize the operation and energy output of ITER, scientists need to solve the equations that describe the magnetized plasma. These equations are very complex, and require specialized software. Several of the leading codes that are being used for predicting and optimizing the performance of ITER and other smaller experiments have used SuperLU, which is the most efficient software package for solving these equations. The ability to make calculations of unprecedented accuracy and efficiency is critical if scientists are to get the most out of the $10 billion ITER experiment.

Another research application of SuperLU is in designing particle accelerators, which are some of the most powerful experimental tools available for basic science, providing researchers with insight into the basic building blocks of matter. They have led to substantial advances in applied science and technology, such as nuclear medicine, and are being studied for potential application to problems related to energy and the environment. In fact, 14 of the 28 facilities in the DOE 20-year plan Facilities for the Future of Science are particle accelerators. Given the importance of particle accelerators to the United States’ scientific, industrial and economic competitiveness, bringing the most advanced high performance computing tools to bear on accelerator design, optimization and operation is in the national interest.

Scientists at SLAC National Accelerator Laboratory have developed an electromagnetics modeling code, Omega3P, to optimize cavity shapes for increased accelerating gradient and beam current. SuperLU is one of two linear solvers being used to solve these challenging equations reliably and efficiently. A significant accomplishment is the successful modeling of the 3D radio frequency cavity shape, which involves the solution of the highly indefinite linear systems of 52 million unknowns using 8,000 or more processing cores.

SuperLU is also used in a variety of commercial applications, including Walt Disney Animation Studios, aircraft design, the oil industry, and the semiconductor industry. It has been adopted by many commercial mathematical libraries and software, including Cray’s LibSci, FEMLAB, HP’s MathLib, IMSL, NAG, OptimaNumerics, Python (SciPy) and PhoeniX Optical Simulation Software for nanotechnologies.

Because SuperLU is so widely used, Li and her colleagues spend considerable time maintaining the library, which cuts into the amount of time she could spend on other research and writing papers, which is often a measure of scientific productivity.

“Although much of the time and effort spent in the software maintenance is not reflected in our research publication list, it is more than rewarding to see the wide use of this software in both the high-end scientific world and the commercial world,” Li said. “As long as there are happy users, we will have a place in this enterprise.”