Environmentalists have long lamented the destructive effects of greenhouse gases, with carbon dioxide (CO2) often accused of being the primary instigator of global climate change. As a result, numerous efforts are under way to find ways to prevent, capture and sequester--perhaps even bury--CO2 emissions and reduce their negative effects.

But some researchers say CO2 is getting a bad rap. They contend that it represents a virtually unlimited energy resource that can be recycled into carbon-neutral fuels and chemicals, reducing both the amount of CO2 in the Earth’s atmosphere and our dependence on fossil fuels.

To achieve this role-reversal requires a process known as conversion reaction—the electro- or photochemical reduction of CO2. The goal of conversion reaction is to break CO2’s molecular bonds and make it more flexible so it is easier to transform it into something else. This requires exposing the CO2 to an energy source in combination with a catalyst such as pyridinium. 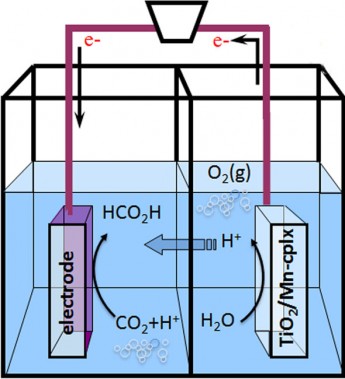 Researchers have shown that by submerging a platinum semiconductor into an acidic solution of pyridine and CO2 and charging it with just 600 millivolts of electricity, the CO2 can be transformed into formic acid, formaldehyde and methanol. Now simulations conducted on NERSC supercomputers explain why. Image: V. Batista

“CO2 has two double bonds and is very rigid, so it doesn’t want to react,” said Victor Batista, a professor of chemistry at Yale University whose research group has been using supercomputers at the Department of Energy’s National Energy Research Scientific Computing Center (NERSC) to study novel ways to do this. “So the question is, how do you make it reactive and convert it into something that can be used as a fuel, and do this with as little energy as possible?”

Unfortunately, early conversion reaction efforts required high electrode overpotential (the charge transfer of an electrochemical reaction), leading to very energy-inefficient processes that defeated the purpose of using CO2 to create an alternative energy source. But in the 1990s researchers at Princeton University demonstrated that CO2 reduction could be achieved via conversion reaction at much lower overpotentials. In their approach, the CO2 was placed in a water-filled chamber along with a catalyst (pyridinium) and an electrode with a palladium surface. By plugging the electrode into a standard electrical outlet, the CO2 was converted into methanol.

It took another 15 years, however, for the scientific community to take notice, after a 2008 study published in the Journal of the American Chemical Society demonstrated that by submerging a platinum semiconductor into an acidic solution of pyridine and CO2 and charging it with just 600 millivolts of electricity, the CO2 could be transformed into formic acid, formaldehyde and methanol. That study, led by Andrew Bocarsly, a professor of chemistry at Princeton, prompted a flurry of related research worldwide and a commercial spinoff, Liquid Light, co-founded by Bocarsly.

Still, a key question remained: what causes the conversion reaction?

“That has been the mystery,” Batista said. “The pyridinium is doing something, but we have not been sure what it is.”

Now he and colleagues from Yale University and Brookhaven National Laboratory believe they have solved the reaction mechanism mystery. Their findings appear in the Journal of Physical Chemistry Letters.

The researchers initially speculated that the pyridine was serving as a catalyst and that the platinum surface assisted in the generation of the pyridine radical. They also thought the reduction of pyridine at low overpotentials might be generating other species involved in the CO2 reduction.

But through computer simulations involving a free-energy analysis of reaction intermediates, they discovered a simpler explanation: the CO2 is reduced by platinum-bound hydrogen atoms, not the pyridinium itself. These atoms migrate from the platinum surface to the CO2 surface via a proton-coupled hydride transfer mechanism activated by the acidic pyridinium ions.

“When CO2 comes to the surface of platinum, it finds the surface covered with hydrogen, which can be transferred to CO2 as ‘hydride’ (hydrogen plus an electron),” he said. “When that happens, a CH bond is formed and you make formate, which simultaneously transforms into formic acid by receiving a proton from a pyridinium moiety.” Like CO2, formic acid can react at the surface, picking up an electron from the electrode and a proton from the pyridinium, which transforms it into formaldehyde and then methanol (depending on the catalyst and the surface material).

“From our calculations, everything we are observing so far can be explained by the mechanism we have proposed,” Batista said. The calculations included a reaction energy profile, which explores how the CO2 molecule reacts at the surface—a process that took several weeks of computing on NERSC’S Hopper supercomputer, he noted.

These findings will be useful in the design and development of new technologies that can generate fuels with a carbon-neutral footprint, turning CO2 into an alternative feedstock, according to Batista and his co-authors. But their investigations are far from over. They are now looking at using different electrocatalysts and metal surfaces through an ongoing CO2 reduction collaboration with researchers at University of California, San Diego and Emory University.

“Other electrocatalysts might have advantages when compared to pyridinium in terms of cost, robustness, etc.,” Batista said. “Pyridine is cheap, but it's also toxic and has a foul smell. But imidazole is very similar to pyridinium and seems to react just like pyridinium.”

In addition, they are collaborating with none other than Bocarsly himself on a paper about the isotopic substitution effect and the nature of the surface used in conversion reaction.

“We want to see if other metals, such as gold, nickel and platinum, would work and what the surface reaction would be,” he said. “We think a lot of it has to do with how much hydrogen binds to the surface.”