Dispelling a Misconception About Mg-Ion Batteries Using first-principles molecular dynamics simulations, Berkeley Lab researchers working under the JCESR Energy Hub, found that Mg-ions (orange) are coordinated by only four or five nearest neighbors in the dichloro-complex electrolyte rather than six as was widely believed.

Lithium (Li)-ion batteries serve us well, powering our laptops, tablets, cell phones and a host of other gadgets and devices. However, for future automotive applications, we will need rechargeable batteries with significant increases in energy density, reductions in cost and improvements in safety. Hence the big push in the battery industry to develop an alternative to the Li-ion technology.

One promising alternative would be a battery based on a multivalent ion, such as magnesium (Mg). Whereas a Li-ion with a charge of +1 provides only a single electron for an electrical current, a Mg-ion has a charge of +2, which means Mg-ions, in principle, can provide twice the electrical current of Li-ions if present with the same density. Mg-ion batteries would also be safer and less expensive than Li-ion batteries. However, the additional charge on a multivalent ion creates other problems that have hampered the development of Mg-ion batteries.

This situation may soon change thanks to new findings from Lawrence Berkeley National Laboratory (Berkeley Lab) as part of the Joint Center for Energy Storage Research, a DOE Energy Innovation Hub.

David Prendergast and Liwen Wan, scientists working in the Theory of Nanostructured Materials group at the Molecular Foundry, ran a series of computer simulations that dispelled a long-standing misconception about Mg-ions in the electrolyte that transports the ions between a battery’s electrodes.

“The catch for multivalent ions is that their increased charge draws more attention to them – they become surrounded in the battery’s electrolyte by other oppositely charged ions and solvent molecules – which can slow down their motion and create energetic penalties to exiting the electrolyte for the electrodes,” says Prendergast. “However, we found the problem may be less dire than is widely believed.”

Based on X-ray absorption experiments with Mg-containing solids, such as the salt magnesium chloride, and crystals derived from the class of working electrolytes used for Mg-based batteries (dichloro-complex solutions), it has been assumed that Mg-ions are surrounded (or strongly coordinated) by six nearest neighbors, which could be counter-ions, such as chlorides, or solvent molecules, in this case tetrahydrofuran. This bulky six-fold coordination sphere would make it difficult for Mg-ions to move through a battery, if it were also present in the liquid electrolyte.

Running first-principles molecular dynamics simulations on the supercomputers at Berkeley Lab’s National Energy Research Scientific Computing Center (NERSC), as well as the Vulcan computer cluster system at the Molecular Foundry, Prendergast and Wan found that Mg-ions are coordinated by only four nearest neighbors in the electrolyte.

“This is good news for Mg-based batteries, since it means that there are less species to carry around and shed as the battery undergoes discharging or charging,” Prendergast says. “Our findings also suggest that the performance bottlenecks experienced with Mg-ion batteries to date may not be so much related to the electrolyte itself, but to what happens at the interface between the electrolyte and electodes as the Mg-ions shed their coordination spheres.”

Prendergast and Wan published the results of their work in the Journal of the American Chemical Society. Their paper is titled “The Solvation Structure of Mg Ions in Dichloro Complex Solutions from First-Principles Molecular Dynamics and Simulated X ray Absorption Spectra.” 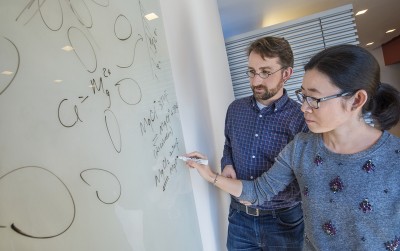 David Prendergast and Liwen Wan at the Molecular Foundry used supercomputer simulations to dispel a popular misconception about magnesium-ion batteries that should help advance the technology in the future. (Photo by Roy Kaltschmidt, LBNL)

In their simulations, Prendergast and Wan considered Mg monomer and dimer structures in both neutral and positively-charged states interacting with a combination of chloride anions (Cl-) and tetrahydrofuran solvent molecules in the so-called dichloro-complex (DCC) solution. They found that, at room temperature, the Mg-ions tend to be tetra-coordinated in the solution instead of hexa-coordinated, which is the predominant solid-phase coordination. As to why recent X-ray absorption experiments on a DCC electrolyte pointed to a hexa-coordination of the Mg-ions, the theorists have an idea.

“Our hypothesis is that the dissolved magnesium chloride salt may be precipitating out of solution, or at least forming the seeds of magnesium chloride crystals in cases where the initial salt concentration is high and approaching its solubility limit,” says Wan. “Local fluctuations in concentrations near electrode surfaces may be enough to drive this switch to solid-phase coordination and create problems in working cells by trapping active material in an insoluble form.”

Prendergast and Wan say their findings provide an alert for battery designers to be wary of high electrolyte concentrations for Mg-ions.

“Also,” says Prendergast, “our results might inspire the design of future experiments to explore the switch from soluble four-fold coordinated multivalent ion species to the formation of poorly soluble six-fold species – especially since we have predicted that (Mg K-edge) X-ray absorption measurements should provide a clear contrast between these limiting cases.”