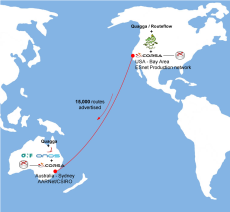 This deployment validates the benefits of open source SDN principles to flexibly deliver agile applications at a fraction of the cost of traditional proprietary networking solutions. Successfully deploying carrier-grade SDN applications with control and data planes capable of running at Internet-scale capacity in the WAN using disparate SDN systems represents an important milestone for the networking industry.

The deployed SDN-based peering router, developed by ONF and the ONOS Project, is a free, open source application built on ONOS and is currently available for download from the ONOS Project website. It enables SDN networks to seamlessly interact with software-defined and traditional (non-SDN) networks by peering with one another to advertise, collect and exchange routes using eBGP. The peering application receives route advertisements from peers, resolves next hops and then programs the OpenFlow switch in the SDN data plane through ONOS.

The ONOS-based peering router is deployed across two sites in Sydney, Australia. The Corsa switch is located in an AARNet data center in Haymarket and the ONOS application in a CSIRO research laboratory in Marsfield, approximately 15km away. It controls the high throughput Corsa OpenFlow DP6410 data plane and successfully peers across a trans-Pacific Layer 2 VLAN with a complementary SDN-based router, Vandervecken, at ESnet in Berkeley, Calif.  The ESnet site also uses a Corsa DP6420 data plane, programmed by the Vandervecken SDN router software developed by Google and based on Routeflow project1 and Quagga on a Ryu controller.

Peering Router Deployment
The production ESnet (AS293) router advertises 15,000 routes comprising research and education networks to the Vandervecken Router, which in turn advertises these to the peering router in Sydney, Australia. In addition to successfully peering with the Vandervecken router, the ONOS-based router also peers with a traditional router in a private AS within AARNet/CSIRO.

“Having successfully exchanged 15,000 routes in this deployment reflecting true Internet scale and 100,000 routes in lab tests, it was programming the data plane with large forwarding tables that presented the real technical challenge here,” said Bill Snow, vice president of Engineering at ON.Lab. “This operation has been up and running for over a month now, so it is no longer a question of whether SDN control planes can be deployed to support worldwide infrastructure. With ONOS’ support for high availability, scale and performance and with Corsa’s high performance, programmable data plane, the promise of SDN is turning into reality. An SDN control plane that readily interoperates with existing infrastructure, whether traditional or software-defined is the key to providing a migration path from legacy systems as well as a roadmap to pure SDN infrastructure.”

“The successful deployment of this software-defined peering solution across continents is an important milestone in the development of next-generation IP networks and the adoption of open SDN,” said Dan Pitt, executive director of the Open Networking Foundation. “The collaborative effort from these organizations enables this communication across continents and demonstrates an international effort in the advancement of SDN. This project builds on our successful development of a segment router, incorporates the OpenFlow protocol between the control and data planes, and will serve as a foundation for additional ONF and community-based projects.”

Adaptive and scalable controllers like ONOS enable real production use cases for OpenFlow-based software-defined networks and are critical to the adoption of SDN.  Corsa’s high performance OpenFlow v1.3+ data planes bring multi-table processing power and 100G line speeds to the data plane for the many SDN and NFV applications demanding Internet scale.

“ONOS controlling the network routing and OpenFlow hardware providing scale, demonstrates that network-wide peering arrangements can be initiated and adjusted as needed on the fly, all under SDN control,” said Corsa CTO Yatish Kumar.  “We have also shown the progress of open source software in achieving SDN. This is just the beginning of an emerging phase in SDN networking as more and more open projects come on line with reliable, useful code.”

ESnet has been collaborating with Google and REANNZ for the past few years to research, deploy and scale operational SDN-IP software stacks.

“As the Department of Energy’s high-bandwidth network for science, it’s exciting to be a partner in this project that is helping to transform networking,” said ESnet CTO Inder Monga. “Operational deployment of SDN-IP stacks will enable existing networks to seamlessly integrate with innovative SDN network deployments. Since we are funded by the U.S. government, it’s important this software is free and open source so that our investment in the project can be further leveraged by the rest of the networking community.”

“AARNet and CSIRO are very excited to be partners in this project to help demonstrate working implementations of SDN technology. Our organizations are currently collaborating in an Australian government funded initiative with nine Australian universities to build an ONOS-based SDN test-bed to demonstrate the real value of SDN to Australian companies and accelerate its uptake,” said CSIRO Research Engineer Craig Russell. “This project shows that scalable, SDN-IP software stacks can be deployed on real networks.”

David Wilde, AARNet’s network architect said, “This project is a great example of a global collaboration in an exciting area of technology. Much of the focus in SDN until now has been on networking within the datacentre, so it’s an important step forward to see this work across a wide-area network.”

About ESnet
The Energy Sciences Network (ESnet) is a high-performance, unclassified network built to support scientific research. Funded by the U.S. Department of Energy’s Office of Science (SC) and managed by Lawrence Berkeley National Laboratory, ESnet provides services to more than 40 DOE research sites, including the entire National Laboratory system, its supercomputing facilities, and its major scientific instruments. ESnet also connects to 140 research and commercial networks, permitting DOE-funded scientists to productively collaborate with partners around the world.

Open Networking Lab is a non-profit organization founded by SDN inventors and leaders from Stanford University and UC Berkeley to foster an open source community for developing tools and platforms to realize the full potential of SDN. ON.Lab brings innovative ideas from leading edge research and delivers high quality open source platforms on which members of its ecosystem and the industry can build real products and solutions.

About ONF
Launched in 2011 by Deutsche Telekom, Facebook, Google, Microsoft, Verizon, and Yahoo!, the Open Networking Foundation (ONF) is a growing nonprofit organization with more than 140 members whose mission is to accelerate the adoption of open SDN. ONF promotes open SDN and OpenFlow technologies and standards while fostering a vibrant market of products, services, applications, customers, and users.

About AARNet
AARNet Pty Ltd (APL) is the not-fo-profit company that operates Australia’s Academic and Research Network (AARNet). The shareholders are 38 Australian universities and the CSIRO. AARNet provides high capacity, leading edge internet and other advanced networking and communications services to the nation's research and education community, including universities, health and other research organisations, schools, vocational training providers and cultural institutions. The network supports collaboration and innovation, connecting researchers and educators to data, tools, peers and students around the nation and the world. Over one million people access the AARNet network and services for research, teaching and learning.

About CSIRO
CSIRO (Commonwealth Scientific and Industrial Research Organisation) is Australia’s national science organization and one of the most multidisciplinary research organizations in the world. It plays a vital role in enhancing collaboration within the Australian national innovation system, and as a trusted advisor to government, industry and the community. CSIRO’s research spans five broad areas: food, health and life science industries; energy and minerals; environment; information and communications; and manufacturing and materials. CSIRO invented and patented the wireless LAN in the 1990s and continues to do research and development of next generation telecommunications solutions. Collectively, CSIRO’s innovation and results place it in the top ten applied research agencies in the world.