A physicist by training, Bard is no stranger to big data analysis. Before coming to NERSC, Bard was a cosmologist at the SLAC National Laboratory where she developed and implemented algorithms to analyze large amount of data for the Large Synoptic Survey Telescope. She notes that modern cosmology involves analyzing enormous amounts of data from both simulations and telescopes.

“I have always been interested in using computing to solve scientific data challenges. I started my career working in particle physics, where large-scale computing is essential to analyze both simulation and experimental data. But, I really got interested in the guts of computing when I started writing code for GPUs—I found I really enjoy designing code optimized for a specific computing architecture, ” says Bard. “So I'm very excited about the upcoming Cori system at NERSC, and how we can take advantage of its architecture to enable very intensive scientific data analysis.”

A native of Yeovil, England, Bard earned her undergraduate degree in physics and French at Nottingham University. She then moved to Scotland, to pursue a PhD in experimental particle physics at the University of Edinburgh. As part of her doctoral research, she worked on the BaBar particle physics experiment at SLAC, which is how she became acquainted with the Bay Area. She’s now been a San Francisco resident for 10 years.

When Bard isn’t working, she likes to hike and see the Bay Area scenery up close. She also likes to attend concerts, do metalwork on art projects, as well as read sci-fi and fantasy books. 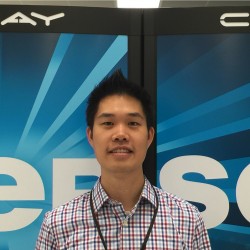 As a network engineer in NERSC’s Operations Technology group, Jackson Gor will help monitor and support ESnet—to minimize outages and downtime, as well as serve as a liaison between the NERSC and ESnet operations teams.

Before joining NERSC, Gor worked in the operations group at CENIC—a research and education Internet service provider for California—for two-years. Prior to that, he spent five-years as a test engineer at CISCO.

“I first became interested in computing in sixth grade. My dad purchased a computer for me to do school work. As it broke over the years, I learned how to fix it. Eventually, I developed a hobby of building computers and helped my friends troubleshoot every time they had a computer issue,” says Gor.

A native of Anaheim, Gor earned an undergraduate degree in “information and computer science, computer science and networking” from the University of California, Irvine. In his free time Gor enjoys traveling, experiencing new cultures and trying new food. As a kid, his grandma used to take him to the airport just to watch airplanes land and takeoff. He credits this experience with inspiring his love of aviation and travel. 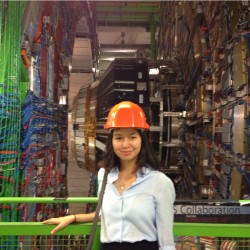 As a network engineer in NERSC’s Networking, Security & Servers group, Indira Kassymkhanova will work to configure, design, manage, operate and implement the facility’s network. This work is especially critical as NERSC moves from the Oakland Scientific Facility to the Computational Research and Theory (CRT) building on Berkeley Lab’s main campus.

Before coming to NERSC, Kassymkhanova was a network engineer at the California Institute of Technology (Caltech) where she worked on the USLHC network. She was based at CERN in Geneva, Switzerland, and even participated in the SC14 demo “Distribution over the Terabit networks,” when it was held in New Orleans, Louisiana. Prior to that, she worked as a teaching assistant at the University of Pennsylvania while she was pursing her Master’s degree in telecommunications and network engineering.

Kassymkhanova notes that she was interested in pursuing a Bachelor’s degree in telecommunications at the age of 16, but decided to pursue network engineering as a career after taking some classes at the Cisco Netacad Academy. “These classes provided me with an opportunity to work hands-on with routers and switches and gave me a motivation to evolve my skills further,” says Kassymkhanova.

A native of Kazakhstan, Kassymkhanova came to the United States to pursue her Master’s degree. An avid table tennis player, she played on her university team in Kazakhstan and on the team at CERN during the Inter Enterprise Competition tournament in 2014. 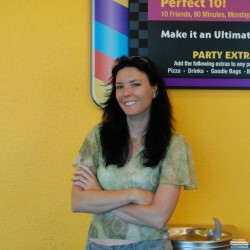 This month Lisa Theobald joined the Computing Sciences Directorate as Assistant to Associate Laboratory Director Kathy Yelick. As part of this role, she will also support the CS area with special projects.

“Having worked at the Lab for so long I am very familiar with the systems and policies,” says Theobald, who started her Berkeley Lab career in 1998 in the Life Sciences Division. Before joining Berkeley Lab, Theobald owned her own business for nine years. In this role she managed a staff of 25 and served over 1,500 customers per year.

A Bay Area native, Theobald loved the area so much that she raised four kids here. “There’s no better place to live than in the Bay Area—the access to the beach and mountains can’t be found anywhere else.”

When she’s not working, Theobald likes to spend a lot of time outdoors. As a Boy Scout leader, she does a lot of outdoor activities like camping, backpacking and skiing. She also enjoys riding motorcycles.