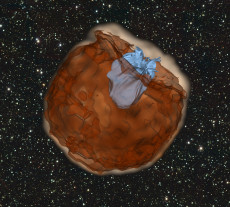 Simulation of the expanding debris from a supernova explosion (shown in red) running over and shredding a nearby star (shown in blue). Image credit: Daniel Kasen, Berkeley Lab/ UC Berkeley

Type Ia supernovae are famous for their consistency. Ironically, new observations suggest that their origins may not be uniform at all. Using a “roadmap” of theoretical calculations and supercomputer simulations, astronomers observed for the first time a flash of light caused by a supernova slamming into a nearby star, allowing them to determine the stellar system from which the supernova was born. This finding confirms one of two competing theories about the birth of Type Ia supernovae. But taken with other observations, the results imply that there could be two distinct populations of these objects. The details of these findings will appear May 20 in an advance online issue of Nature.

“By calibrating the relative brightness of Type Ia supernovae to several percent accuracy, astronomers were able to use them to discover the acceleration of the Universe.  But if we want to push further and constrain the detailed properties of the dark energy driving acceleration, we need more accurate measurements. If we don’t know where Type Ia supernovae come from, we can’t be totally confident that our cosmological measurements are correct,” says Daniel Kasen, an Associate Professor of Astronomy and Physics at UC Berkeley, who holds a joint appointment at the Lawrence Berkeley National Laboratory (Berkeley Lab).

In 2010, Kasen predicted a new way to test the origins of supernovae. Using theoretical arguments and simulations run on supercomputers at the Department of Energy’s National Energy Research Scientific Computing Center (NERSC), he showed that if a supernova is born in a binary star system, the collision of the debris with the companion star will produce a brief, hot flash of light. The challenge is then to find a Type Ia event shortly after it ignites, and quickly follow it up with ultraviolet telescopes. Using an automated supernova-hunting pipeline—the intermediate Palomar Transient Factory (iPTF), which uses machine-learning algorithms running on NERSC supercomputers—astronomers did just that. They found iPTF14atg just hours after it ignited in a nearby galaxy. Follow up observations with NASA’s Swift Space Telescope showed ultraviolet signals consistent with Kasen’s predictions.

“Kasen’s paper was very important to our work. Without it, we wouldn’t have known what to look for,” says Yi Cao, a graduate student at Caltech and lead author of the Nature paper. “With the help of NERSC’s Edison supercomputer, the iPTF pipeline can turn up supernova candidates 10-15 minutes after its initial detection. This is crucial to our work to search for the ephemeral signal predicted by Kasen.”

“We often talk about how computational science is the third pillar of the scientific
method, next to theory and experimentation, this finding really brings that point home. In this case, we can see how computational models and tools are driving discovery and transforming our knowledge about the cosmos,” says Peter Nugent, Berkeley Lab scientist and member of the iPTF collaboration.

Because the relative brightness of Type Ia supernovae can be measured so well no matter where they are located in the Universe, they make excellent distance markers. In fact, they were instrumental to measuring the accelerating expansion of the Universe in the 1990s—a finding that netted three scientists the 2011 Nobel Prize in Physics, including one for Berkeley Lab’s Saul Perlmutter. Yet, astronomers still do not fully understand where they come from.

There are currently two competing origin theories. In both theories, the white dwarf star that eventually becomes a Type Ia supernova is one of a pair of stars that orbits around a common center of mass. In the double-degenerate model the stellar companions are both white dwarfs and the supernova ignites when both stars merge.

In the competing single-degenerate model a white dwarf star orbits with a Sun-like star or a red giant star, which is essentially a dying Sun-like star. As these stars orbit, the white dwarf’s gravity pulls, or accretes, material from its stellar companion. As the white dwarf becomes more massive, the temperature and pressure in its core increases, eventually initiating a runaway nuclear reaction, which will end in a dramatic explosion or Type Ia supernova.

In the single-degenerate model, Kasen predicted that the material ejected from a Type Ia supernova would slam into its companion star, generating a shockwave that heats the surrounding material. According to his calculations, the collision should produce emissions detectable at ultraviolet wavelengths in the hours and days following the supernova explosion. And, that’s exactly what Cao and his team at Caltech saw in the Swift observations.

The Swift telescope measured a pulse of ultraviolet radiation that declined initially but then rose as the supernova brightened. Because such a pulse is short-lived, it can be missed by surveys that scan the sky less frequently than the iPTF does.

“We have never observed a white dwarf just before it went supernova, but if you can get data soon after ignition, it may be possible to infer the nature of the progenitor system,” says Kasen.

After Kasen made his prediction in 2010, he notes that a lot of people tried to look for the ultraviolet signature, but this is the first-time that anyone has seen it. “This discovery is a proof of principal that we can get images of Type Ia supernovae in their infancy. Now we can move forward and try to acquire a large number of these ‘baby pictures,’ which will tell us how the different channels for igniting stars affect the properties of the supernova,” says Kasen.

According to Shrinivas Kulkarni, Professor of Astronomy and Planetary Science at Caltech and principal investigator for the iPTF, the discovery "provides direct evidence for the existence of a companion star in a Type Ia supernova, and demonstrates that at least some type Ia supernovae originate from the single-degenerate channel."

Although the data from supernova iPTF14atg support the single-degenerate model, the double-degenerate model has not been disproven. In fact, previous data from the iPTF have provided credible evidence to support that alternative theory. And that means that both theories actually may be valid, says Caltech Professor of Theoretical Astrophysics Sterl Phinney. "The news is that it seems that both sets of theoretical models are right, and there are two very different kinds of Type Ia supernovae."

“It’s really exciting to learn that something that once only existed in your imagination, is actually out there in the real Universe. Automated surveys like iPTF have revolutionized the field by catching these events earlier and earlier. It opens up a new avenue for studying the life and death of stars,” says Kasen.

Kasen is not a member of the iPTF collaboration and was not involved in the Nature study. He developed his 2010 “roadmap” using codes developed and resources provided by DOE’s Computational Astrophysics Consortium SciDAC program, which was led by Stan Woosley at UC Santa Cruz.

iPTF is a scientific collaboration between Caltech; Los Alamos National Laboratory; the University of Wisconsin, Milwaukee; the Oskar Klein Centre in Sweden; the Weizmann Institute of Science in Israel; the TANGO Program of the University System of Taiwan; and the Kavli Institute for the Physics and Mathematics of the Universe in Japan. NERSC is a DOE Office of Science User Facility.

For more information on Nature paper and observations, see the Caltech press release.

Read Kasen's 2010 paper "Seeing the Collision of a Supernova with its Companion Star".