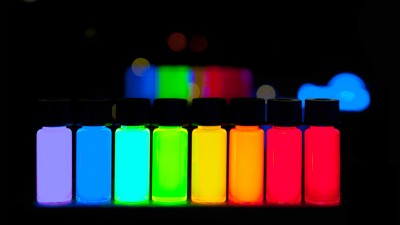 Quantum dots are nanoparticles of semiconductor that can be tuned to glow in a rainbow of colors. Since their discovery in the 1980s, these remarkable nanoparticles have held out tantalizing prospects for all kinds of new technologies, ranging from paint-on lighting materials and solar cells to quantum computer chips, biological markers, and even lasers and communications technologies.

This “fluorescence intermittency,” as scientists call it, has put a damper on many potential applications. Lasers and logic gates won’t work very well with iffy light sources. Quantum dots can absorb specific colors of light, too, but using them to harvest sunlight in photovoltaics is not yet very efficient, due in part to the mechanisms behind blinking. 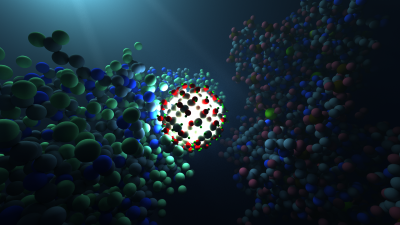 Only a handful of atoms wide, quantum dots can illuminate the smallest of biological structures, like cancer cells. Yet, they glow brighter and last longer than today’s fluorescent dyes and can be synthesized to glow different colors by adding or subtracting a few atoms rather than using different materials. (Illustration by Nicholas P. Brawand)

Quantum dots—known variously as nanocrystals, nanoparticles and nanodots—posses some beneficial properties that their bulk counterparts lack.

Excite a quantum dot and it glows brightly in a specific color of light. Vary the width by a few atoms and you can tune it to glow different colors: The smaller the dot, the bluer the light. The larger the dot, the redder. Quantum dots can likewise be tuned to absorb specific wavelengths of light, a useful property for solar cells.

In comparison, the molecular structure of bulk semiconductors determines (and limits) the colors of light (or energies) emitted and absorbed. So, a light-emitting diode (LED) made of one material may glow green while another glows red. To get different colors, you must use different materials. Solar cells, likewise, use layers of different materials to capture various wavelengths of light.

So, why does a nanocrystal of semiconductor behave so differently than a larger lattice of the same material? In a word: size. Artificially fabricated to contain just a handful of atoms, quantum dots are so small that they exist in the twilight zone between Newtonian and quantum physics, sometimes obeying one set of rules, sometimes the other, often to surprising effect.

While the crystals of bulk semiconductors can lose and regain electrons (that’s how they conduct a charge) the electrons of a quantum dot are confined within the dot. This state is called quantum confinement. When the electrons of a quantum dot interact with light, they can undergo a transition and "jump" (quantum-mechanically) to a state that under normal conditions is unoccupied. The energy associated with the smallest jump is called the gap. The gap is thus the excess energy that electrons can shed, ideally as light (or in the case of photovoltaics, carriers) when snapping down to a lower energy state. As a result, the radius of the material defines the energy these dots can absorb and emit. 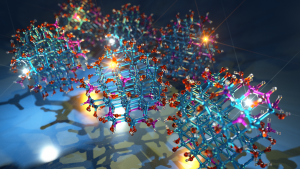 In this illustration, silicon quantum dots are shown in various states of “blinking.” The “on” crystals emit light (represented by a white dot) as an excited electron sheds excess energy as a photon. The “off” crystals are dark, because their electrons (yellow) are trapped in surface defects and siphon off energy through other paths, like heat or lattice vibrations. (Illustration by Peter Allen, Institute for Molecular Engineering, University of Chicago)

Quantum dots, however, tend to blink on and off. The blinking isn’t random (it obeys a “power law”), but it also isn’t predictable. Thus, individual particles might go dark only for nanoseconds or remain dark for minutes at a time or some interval in between.

Scientists have some ideas about what causes the blinking, but still don’t understand exactly how it works, said Márton Vörös, a University of Chicago postdoctoral researcher who coauthored the study.

“There’s been this idea that surface defects, for example a dangling bond on the surface of a nanocrystal, can trap electrons and cause this switching between bright and dark states,” said Vörös who performed the calculations at NERSC. “There are quite a few microscopic models already put forward by other groups that rely on defects but a complete understanding is still missing.”

To study blinking, the team used simulated silicon (Si) nanoparticles configured with various defects and coated with silicon dioxide. Starting with three different possible defect states, they used the Hopper supercomputer (a Cray XE6) to calculate the optical and electronic properties of the oxidized silicon nanoparticle with the scientific package called Quantum Espresso.

To perform their calculations, the team first constructed virtual models. They computationally carved virtual holes out of a crystalline silicon oxide (SiO₂) matrix and inserted silicon quantum dots of various sizes, computing cycles of annealing and cooling to create a more realistic interface between the quantum dots and the SiO₂ matrix. Finally, dangling bond defects were introduced at the surface of quantum dots by removing a few selected atoms.

By computing the electronic properties and the rate at which electrons release energy, they found that trapped states do indeed cause quantum dot dimming. Dangling bonds on the surface of silicon nanoparticles trapped electrons where they recombined “non-radiatively” by releasing heat. That is, the electrons shed excess energy without radiating light. But it was a little more complicated than that. Dimming also depended on the overall charge of the entire quantum dot, the team found.

Sometimes an electron can get trapped in the material a dot is embedded in, silica in this case, giving the dot an overall positive charge. Only when the electron remains trapped on the surface of the nanodot, making it neutral or negatively charged would it decay without radiating light. “So, when the dot is positively charged, it will be bright. When it’s neutral or negatively charged, we expect it would be dark,” said Nicholas P. Brawand, a University of Chicago graduate student who coauthored the study.

To arrive at their results, the researchers had to devise realistic models of quantum dots and calculate their properties from basic, scientific principles, what scientists call ab intio (Latin for “from the start”) calculations. Those calculations took more than 100,000 processor hours on Hopper. "The calculations required to come to these conclusions were computationally quite demanding," said Vörös. “We couldn’t have done our work without NERSC’s resources.”

“Our results are the first reported ab initio calculations showing that dangling bonds on the surface of oxidized silicon nanoparticles can act as efficient non-radiative recombination centers,” said coauthor Giulia Galli, who is Liew Family professor of Electronic Structure and Simulations at the University of Chicago’s Institute for Molecular Engineering. “Our findings provide an a priori validation of the interpretation of the role that dangling bond defects play in several photonic and optoelectronic devices.”

Moreover, the researchers’ techniques can be use to tackle the effects of trapping in solar cells. “Trapping, the very same physical mechanism that causes blinking, can actually limit the efficiency of solar cells,” said Vörös. ‘

“Now that we’ve tested this technique, we can apply it to nanocrystal solar cells, too,” Galli said.