Vasudevan comes to Berkeley Lab with a long track record of academic research at Georgia Institute of Technology, University College Cork (Ireland), University of Chicago and the University of Virginia. In between, he also worked as an R&D Engineer at Synopsys, where he was a team member of the group responsible for the design, verification, validation and productization of many complex IP blocks for the DesignWare’s library and cores.

“Over the course of my career, the flavors of projects that I have undertaken beyond my core field have enriched my exploratory research skills. This helps my current project as it involves convergence of multiple sub fields of system design like advanced device modeling, circuit design, hardware modeling, programming, computer architecture design and system integration,” says Vasudevan.

Originally from Southern India, Vasudevan’s interest in computing started as a kid when his neighbor gave him an electronic video game. His curiosity sparked when he saw how the scores were counted. This inspired him to learn more about mini electronics in high school, pursue a Bachelors degree in electronics at the University of Madras, India, as well as Master and Doctorate degrees in computer engineering and computer science at the University of Arkansas, Fayetteville and University of Edinburgh, Scotland respectively.

In his spare time, Vasudevan enjoys doing the Argentine Tango, watching cricket and going on hikes. He also likes to participate in hackathons and work on entrepreneurial ventures. 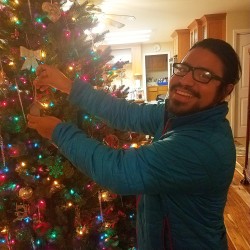 As a Computer Systems Engineer at NERSC, Mario Melara will be continuing his work on a new package manager called Spack, a package management tool designed to support multiple versions and configurations of software on a wide variety of platforms and environments. It was designed for large supercomputing centers, where many users and application teams share common installations of software on clusters with exotic architectures, using libraries that do not have a standard application binary interface.

Although Melara is technically a new Berkeley Lab employee, he has actually been working at NERSC in the same role in the past year as a contractor. Originally from Concord, Melara has spent most of his career as a laboratory researcher studying dementia at both UC Davis and UCSF. He earned his Bachelor’s degree in biological sciences from UC Davis.

“I first became interested in computing when I started doing data analysis in R as a researcher. It was my first programming experience and inspired me to learn more about computing,” says Melara.

In his free time, Melara enjoys biking and running.